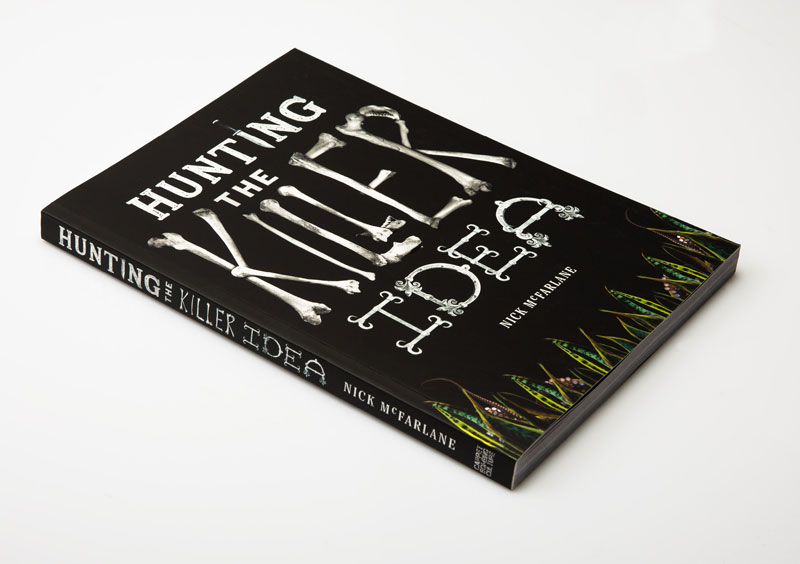 A new book promises to prepare aspiring writers, designers, artists, thinkers, and dreamers to hunt down killer ideas – ideas that could change the world, or at least their own lives.

Hunting the Killer Idea is a razor-sharp guide to creativity. By tearing apart the creative process, the secret of how to capture wild and imaginative ideas is revealed in vivid detail. It is a though-provoking source of inspiration as well as being full of practical tips.

Cutting-edge methods of creative idea generation such as lateral thinking, predatory thinking, the art of persuasion, the innovation engine and many more are presented in graphic format to showcase exactly how to get great results from each approach.

Hunting the Killer Idea is the brainchild of Auckland-based artist/designer Nick McFarlane*, who brings 20 years of experience in advertising, art and design to the task of trapping the creative process inside its pages.

“Killer Ideas are out there, powerful and unpredictable,” he says. “They’re the alpha ideas that have to be hunted deep within the jungle of the mind.

“It makes no difference whether you’re the creative type or not, starting a business, studying, or just plain stuck. This book is essential reading for every single person who knows there’s a killer idea out there – and the time to hunt it down has come.”

“Researching, writing, designing and producing the book was an epic adventure in itself,” McFarlane told M+AD. For some crazy reason I agreed with the publisher to deliver it to him in a 12 month period.

“So putting it together as well as holding down a full time job – and throw a new baby into the mix – and you have a pretty good recipe for disaster. Somehow I managed to hold it all together and supply the files (almost) on time.”

5 Stars
Whether you’re stuck in a rut and needing inspiration or ready to take on the world, Hunting the Killer Idea provides the ammunition to get ahead in life. McFarlane believes creativity equips people with the x-factor and his book aims to help readers unleash their inner creative and stand out that little bit more.

Amazon’s professional reviewers collectively have given the book five stars. M+AD ed David Gapes said he’d also have given it five stars. “This is a remarkable piece of work,” Gapes said. “Weeks of truly inspirational reading at your fingertips. And there’s a good belly-chuckle on every page.”

To purchase a copy of Hunting the Killer Idea head to, huntingthekilleridea.com (NZ$39.95) or get it from amazon.com/Hunting (US$24.95.).

*Author
McFarlane has written two books. His first, Spinfluence: The Hardcore Propaganda Manual for Controlling the Masses is a satirical fable about the war you never knew you were in. His second, Hunting the Killer Idea is an insightful guide to creativity. Both take the reader on a twisted journey to the very heart of each subject.

Artist
McFarlane sinks his teeth into political and popular culture, exhibiting art from London to LA. His work has been shown at Wellington City Gallery, featured in magazines and included in a very serious grown-up book called Art from Oceania.

Designer
Out of the blue, Prodigy rang one day and asked him to design their album cover. A seemingly simple task, ended up taking 166 ideas and drove him to the edge of sanity before he captured the single killer image.

To pay the bills McFarlane works as senior designer at FCB Auckland where he applies design thinking to brand identity and ad campaigns. He bikes home every night to his wife and three children.