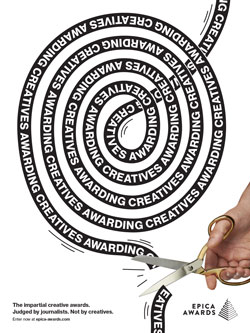 CANNES, June 22: The only global creative prize judged by journalists kicked off its 32nd season with a new advertising campaign, new prizes and a highly respected jury president.

Epica will hold its next jury meeting, conference and ceremony in Amsterdam from November 12 to 15, at the city’s KIT Royal Tropical Institute. This year’s jury president will be Tony Chambers, brand & content director of Time Inc’s Wallpaper magazine.

“As someone who’s passionate about design, branding and communications, I’m delighted to be able to join fellow journalists in these fields to determine who’s doing the most innovative creative work right now,” he says.

The competition’s visually striking new advertising campaign has been created by Wieden & Kennedy in Amsterdam. It reflects Epica’s impartial approach and unique positioning.

In addition, Epica announced the creation of two new grand prix. The Responsibility Grand Prix will honour the best public interest work. It is supported by ACT Responsible, an organisation that supports cause-related advertising.

The Alternative Media Grand Prix will be awarded to the most original campaign in non-traditional channels such as ambient, experiential, events and stunts.

Two new categories to take note of this year: Topical & Real Time Advertising, covering operations that react to current events; and of course the return of World Cup Advertising.

Epica’s editorial director Mark Tungate said: “As usual we’re always trying to evolve with the industry, and we felt that both these grand prix were lacking: one specifically recognising creativity for good causes; and the other celebrating originality in the range of channels beyond traditional advertising.

“It will be a pleasure to present these and the other awards in Amsterdam, one of our favourite locations over the years due to its creative vitality.”