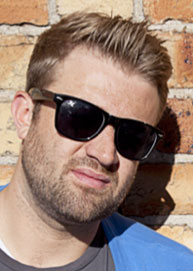 MDS AdSchool CD Kate Humphries writes: “He’s given us the Vmotion project and Vrobbers, some witty Axis & YoungGun-awarded long copy ads for Westpac; a funny Fresh Up Powerful Refreshment TV campaign, and in 2013, he won the Young Lotus competition at Adfest.

“Now, Graeme Clarke, one of our favourite AdSchool graduates at the Media Design School, has just been named a Grand Finalist in the 20th Anniversary of the Raw Comedy Quest.

“That Grand Final is being held this Saturday as part of the 2015 International Comedy Festival, which means that after two months of heats in Auckland, Wellington and Christchurch involving upwards of 200 contestants, Graeme, along with only 11 other rookie comedians, will have six minutes to impress a judging panel made up of both local and international comedians.”

Launched in 1995, the Raw Comedy Quest is New Zealand’s biggest comedy competition with $2000 in prize money, as well as the glory and promise of further work as a professional comedian to be won.

“The Raw Comedy Quest Grand Final kicks off at at 9pm this Saturday at  the Q Theatre in Auckland,” Humphries says.

“So if you want the adman to be the one that wins, get your belly laugh on and purchase a ticket or two right here.”