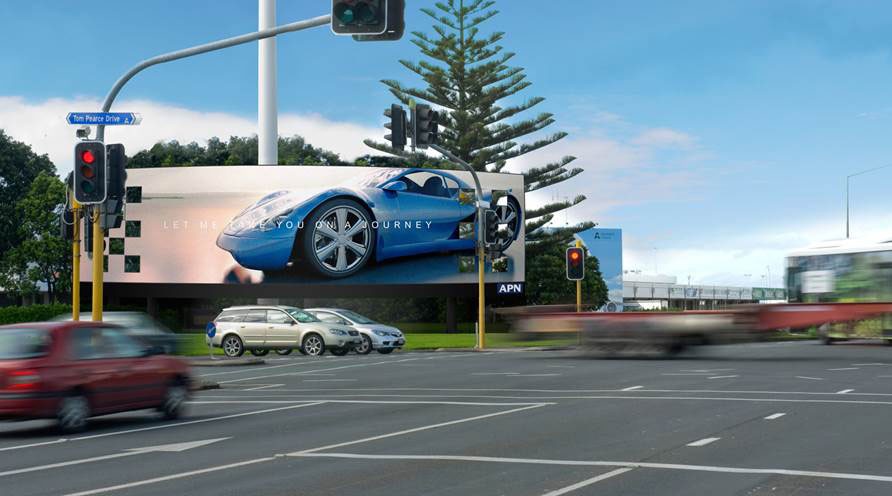 Known as Apollo, named after the Greek God of Light, APN Outdoor’s new landmark site will measure 19.75 x 4.75 metres, and will offer advertisers a staggering 94 sq m worth of supreme advertising space.

Apollo will be located on the corner of George Bolt and Tom Pearce Drives, a high-volume intersection with a potential daily audience of over 55,000 travellers and airport visitors. Standing at 6.8 metres high, the screen will incorporate a contemporary design element featuring a 57 degree ‘arc’ curvature.

“We have been a proud partner of APN Outdoor since launching New Zealand’s first digital billboard in 2013, which utilised our leading-edge LED technology,” said Daktronics region manager Blair Robertson.

“Their digital development plans at Auckland Airport are amongst the most impressive I’ve seen in my 10 years at Daktronics and we are very excited to be teaming up with them again to build this new landmark screen.”

Apollo will be sold in a two-week sales cycle, with advertisers on an eight-second ad rotation.

APN Outdoor general manager Phil Clemas said: “After launching New Zealand’s first digital billboard last year plus our Digital Billboard Network in July this year and seeing the success of both, we are really looking forward to taking our digital expansion to the next level through our redevelopments at Auckland Airport and specifically with the launch of Apollo.

“We very are proud to be offering our clients a site that commands attention through its sheer size, not to mention the strength of its scale. On top of this, Apollo provides APN Outdoor advertisers with all the benefits of digital including minimal lead times, immediacy of posting, day-part messaging and mobile/social convergence.:

APN Outdoor’s redevelopment of Auckland Airport is currently under way with a completion date scheduled for February 2015. Apollo will be live from December this year.