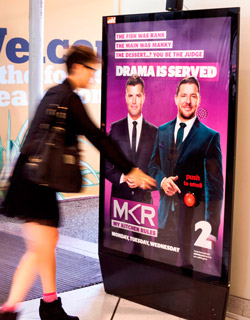 The smell of homemade cooking will drift through key New Zealand out-of-home sites as part of a new campaign by oOh! Media for TVNZ’s new season of My Kitchen Rules Australia.

oOh! New Zealand general manager Cameron Taylor, said the combination of shopaLites with scent, audio and the push-button interaction created a campaign that would generate a high level of engagement among the core audience in a highly relevant environment.

“It was essential that we created a solution that stood out from the crowd given that they are vying for attention among a cluttered category,” he said.

“Collaborating with Starcom and TVNZ we have been able to develop a highly impactful solution that is bound to capture maximum attention and engagement from shoppers passing these special builds.”

“Shoppers who tweet us with what they’ve smelled with #MKRScent have the opportunity to win some coveted official MKR aprons,” Hooper said. “So having this opportunity to create a two-way connection with our audience, as well as a full sensory experience, was too good an opportunity to resist.”

The national campaign runs for four weeks, with different scents and audio running across different centres, supported by 65 digital portrait and landscape retail panels that will reach around 5.5 million shoppers each fortnight.