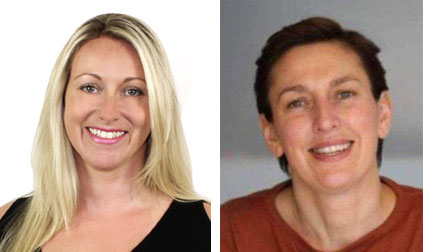 THE POND EXPANDS: Creative talent agency The Pond is ramping up its permanent placement capabilities with the addition of senior talent agent Melanie O’Callaghan.

Melanie O’Callaghan brings eight years of recruitment experience to The Pond and will focus on matching up clients looking for full-time staff with the many local and overseas creative stars now keen to enter full-time employment in New Zealand.

She has most recently worked for boutique recruitment agency Farrow Jamieson where she specialised in searching for, headhunting, and recruiting talent for executive roles across a wide variety of industries.

With O’Callaghan’s appointment, The Pond is now offering a fast-turnaround and reliable permanent placement service that will see candidates sourced, vetted, interviewed and hired within a two-week timeframe, says Pond director Leighton Howl.

“Our dedication to launching a fast-paced permanent placement service in 2015 is complemented by a new range of fees from 10% buy outs to 13% pre-placements to 18% global searches. We believe clients will be hiring creatives full-time in different ways in the future and they will want to trial candidates before making them part of the central team.”

The Pond talent ambassador Michael Dawson said the agency has the very best creative talent in New Zealand arriving daily through its unique acquisition model, plus unrivalled knowledge and relationships within the creative industry.

“So we can hit the ground faster than anyone else to quickly provide clients with candidates drawn from our own networks or sourced from the wider talent market, including Australia, United Kingdom and Asia,” he says. “We have already been operating in the permanent placement space for some time – and have earned fantastic feedback from our clients as a result – but we’re now putting greater focus on this area with Melanie’s appointment.”

The appointment will see O’Callaghan pair up with each of the existing four Pond talent agents who currently each manage an active book of clients. This will mean each client will have two dedicated agents focused on their growing business: one concentrating on week-by-week freelance needs and the other (Melanie) supporting this service with more strategic full-time hires.

“Unlike most recruitment firms, The Pond has a huge focus on acquisition,” O’Callaghan said. “In this industry creatives are always your greatest asset so, whether you’re building a team or need a critical hire straight away, you need a recruitment partner that can find that needle-in-the-haystack candidate you’re looking for (in our case we probably already have it).

“The Pond is ideally suited to step into this partnership role with New Zealand companies looking for full-time creative talent, and we’ll be delighted to discuss how we can help make it happen quickly.” says Melanie.

“Lindsay was elected CAANZ Vice-President in 2011 has led a strong Media Committee for most of the past decade,” said CAANZ ceo Paul Head. “He will be a loss to both the industry and the board but he has left the committee in excellent shape and in the most capable of hands.

“I’m delighted that Louise has been elected to replace him. Louise is renowned across the industry – not just as a talented and accomplished professional, but more importantly as a person who is widely admired and respected.”

In 1999, Bond established the PHD Group of agencies, comprising SparkPHD, PHDiQ and Spark PR & Activate. While SparkPHD has received multiple awards in its history including CAANZ Agency of the Year, Bond was also recognised by the industry and her peers with the Sandy Smith Inspiring Individual Award at the 2013 CAANZ Media Awards.

She has been a member of the Media Commitee since 2012. “I’m really looking forward to extending on my contribution to the media and advertising industry and supporting the goals of CAANZ to drive industry development, innovation and growth during these times of rapid change,” she said.