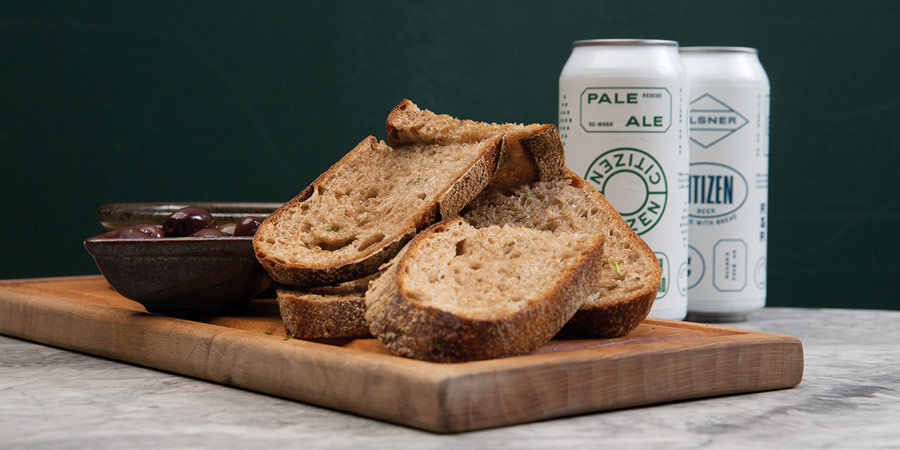 Every can of Citizen craft beer uses the fermentable starches from bread that would otherwise go to waste. A quarter of the malted barley in every brew is replaced with this rescued bread, which in turn saves resources.

Citizen co-founder Mike Sutherland, owner of Sawmill Brewery, said: “Every year, around the world, a third of the food we produce goes to waste.”

For Special Group, the challenge was to build a brand identity that spoke to this disruptive circular approach, without feeling too worthy or earnest.

“Bread, into beer, into bread. Perfect.”

“And with craft beer as Citizen’s first product, the challenge was huge – how to create visual standout on one of the supermarket’s best designed shelves.

“We decided a sense of pared-back simplicity would catch the eye, and went from there.

The brand has no single logo, no single colour palette, no single marque or font. Instead, a series of unique assets are brought together to tell the story.”

“We love that the design identity is a collection of different expressions and ideas – much like we are,” says Donald Shepherd. “And with our ambition to create multiple rescued-food products in future, it’s a design system that’s versatile enough to evolve with us.”

Since launching, Citizen has been profiled on Seven Sharp, The Spinoff, NZ Herald, Radio NZ National, Newstalk ZB, and the Cuisine and Peptalk podcasts.

Citizen is now on tap at a growing number of bars across Auckland and Hamilton, and rolling out in restaurants including Burger Burger, Ahi and The Grounds.

The Pale Ale and Pilsner are on the shelves at Farro and selected New Worlds, Pak’n’Saves, Four Squares, Liquorlands and leading liquor stores nationwide.