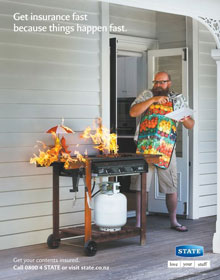 This month’s Ad of the Month Agency League judges were kept busy judging ads from both December and January with two agencies receiving points on the Agency League table.

December saw a win for Colenso BBDO with their State Insurance BBQ ad. Judges Alan Jones (FCB) and Tom Paine (Y&R) said: “it’s something we are all guilty of. It was a humorous ad that caught our attention with a novel use of the medium.”

Special Mention was awarded to Young & Shand for their interactive LifePod ad which incorporated a digital element as well as press. “It was a great use of the medium with only press being able to accommodate this strategy with the finger print,” said Jones & Paine.

Sadly, there was no winner or Special Mentions for January which means February prize pool jackpots to $500. So intending participants should get their entries in.

News Works’ Ad of the Month and Agency League competition is open to any ad that has appeared on a New Zealand newspaper, website or app, or in any print edition. Both digital and print entries vie together for the best monthly accolade, with only one individual ad to be selected top each month – although judges may give special mentions to a number of exceptional ads.

To enter digital or print ads in Ad of the Month and gain points on the Agency League table, go to www.newsworksnz.co.nz/creative/ad-of-the-month/enter