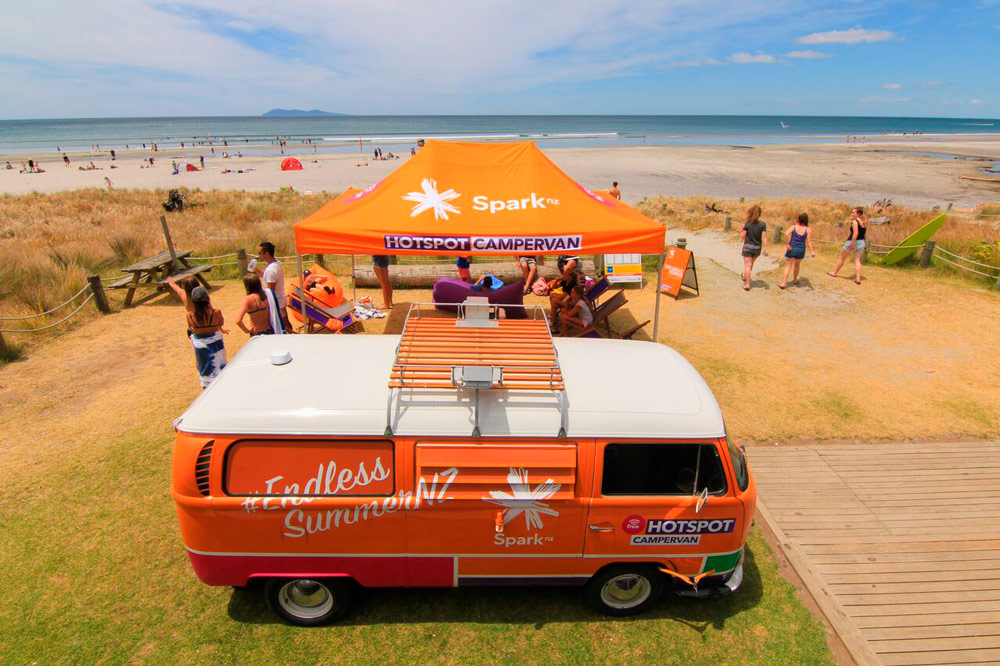 Holidaymakers around New Zealand having been enjoying free wifi this summer, courtesy of Spark’s WiFi Campervans at the best beaches. Colenso BBDO and Spur worked on the activations.

Two campervans travelled around the North and South Island bringing the free wifi, summer giveaways, charging stations, Samsung tablets to use, and shaded lounge areas for those wanting to chill out and take a break from the sun.

At some of the locations the campervans also delivered live Spotify music sessions and outdoor Lightbox screenings.

Each campervan was driven by content creators, who produced videos and photography from the road trip and from each of the activations (scroll down for the video). The content creators were:

The campaign showed up primarily on social, via 100 pieces of unique content across four social media platforms.

“Aside from social, an interesting use of media was a Met Service desktop map integration,” said Spark comms advisor Lydia Tebbutt.

“Mini wifi campervan icons showed up on the Met Service map each day to indicate where in NZ the campervans were. People could then click on a campervan icon to find out more. This worked really well and brought about some great results.”

The agency network
The map integration was part of a media plan delivered by Dynamo. The Colenso copywriter was Mick Stalker, and head of art was Mike Davison.

“We were excited to be able to use our awesome network to help Kiwis extend their summer, said Spark GM customer & marketing Clive Ormerod.