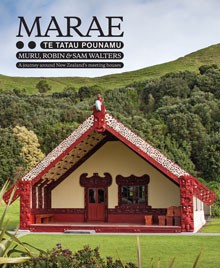 Bishop Muru Walters is a well-known Anglican minister, master carver, poet, broadcaster and former Maori All Black. His son Robin is a photographer and filmmaker. He and his wife Sam, who  is British, run Curious Films.

Together the Walters spent three years visiting most of this country s major meeting houses as well as many of the more humble ones, houses that serve smaller hapu  and iwi, to bring together this beautiful photographic book.

The wharenui are intensively photographed, with detailed shots of their carvings, kowhaiwhai panels, tukutuku panels and much more. Many are photographed during an event, the images conveying a rich sense of life and activity.

Areas that feature specifically in the book are Northland, Bay of Islands, Otago, Southland, West Coast (South Island), Hawkes Bay, Whanganui, Te Urewera, East Coast/Gisborne//Poverty Bay &  Taupo – but many more are covered in the On Reflection chapter in the book.

The hardback is on sale now ($80 RRP) from online retailers Fishpond, Mighty Ape, Paper Plus, The Nile, The Warehouse, and Whitcoulls.