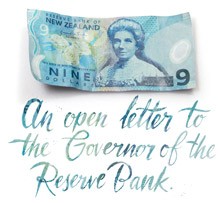 DDB has won July’s Newspaper Ad of the Month with their YWCA 9 dollar open letter ad. “Lovely use of the medium with the recall of a product idea; really nice and tight with great copywriting and art direction,” the judges said.

Special Mention was awarded to Cognito Advertising for their Pipe Down ad.  Judges agree that the “The copy was very well written and the tone was great; good use of long copy in a medium where you’d actually read it; beautifully laid out and to the point,” the judges said.

The second season of Agency League is back with a vengeance.  With this month’s win, DDB sits at the top of the table with 5 points.

The second season of the News Works Agency League started on July 1, and returns with the Agency League Award up for grabs, with monthly ads being judged by top creatives.  Winners receive $250 and Agency League points for their agency which are tallied on a league table to run from July 2014-June 2015.

Ogilvy & Mather were the winners of the inaugural Agency League season, which wound up in March this year, following a gruelling 12-month battle between creative agencies.

To enter digital or print ads in Ad of the Month and gain points on the Agency League table, go to here.

Every monthly winner from 1 July 2013 to 30 June 2014 have automatically be entered into the $10,000 Newspaper Ad of the Year, with the winner being announced at News Works’ annual awards on 2nd October at Sir Paul Reeves Building, AUT, Auckland.