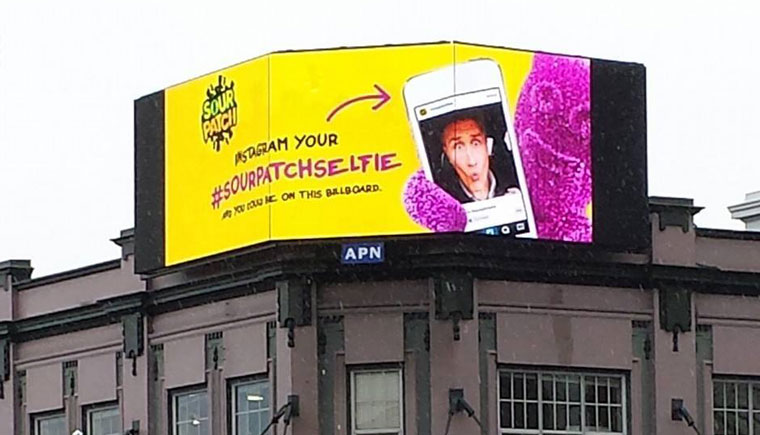 Swedish-Canadian sweet-sour lollies brand Sour Patch (motto: Sour Sweet Gone) has launched into the New Zealand market with a flurry of activity targeted at the digitally native generation. In a New Zealand first this week Sour Patch followers were asked to Instagram their sour face using #sourpatchselfie with the images then projected onto the four digital billboards around Auckland making it the first socially integrated billboard in NZ and the first to stream live content created through a hashtag thread on Instagram.

This activity is being promoted via sampling at universities across the country.

The sour confectionery, which has had huge success in the United States, launched into the New Zealand market in July with a huge online focus. The Sour Patch Facebook page kicked off two weeks prior to launch to build excitement and anticipation before the candy arrived in New Zealand. To build the audience for the page an innovative sweet or sour app was developed at launch to test the sour or sweetness of posts on consumers Facebook pages.

The disruption theme has played throughout the wider campaign with OnDemand disrupted viewing. 3D animated Sour Patch Kids would pop up and disrupt viewing by doing something sour, then sweet such as cracking the screen with a hammer then mending it with tape in the shape of a heart. This was the first time an advertiser has used 3D animation through TVNZ OnDemand.

“This campaign has been great fun to work on as throughout all activity we have adopted the Sour Patch personality,” Sour Patch brand manager Nicola Leenman said. “Targeting Gen Z required us to be innovative and not rely on traditional media channels, the success of our work has really been reflected in sales.”

Before the public launch Sour Patch teamed up with a group of influencers who got to try the product first, the relationship is ongoing with the group getting all news first along with regular product drops. Undercover pranks have also played out throughout cinemas across New Zealand with movie goers being refused entry into their movie (sour) then upgraded into Gold Class (sweet). Two international TVCs have also played throughout the campaign.