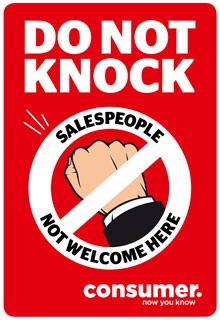 “We get regular complaints about the hard-sell and exploitative sales tactics these traders use,” Chetwin said. “Many cases involve elderly or vulnerable consumers, pressured to sign up for products they don’t want and can’t afford.”

“We’ve dealt with cases involving elderly people sold $3000 vacuum cleaners that clean no better than vacuums you can buy for $100. We’ve also dealt with complaints from consumers pressured to buy grossly overpriced beds and other household goods they couldn’t afford and had to go into debt to purchase,” she said.

As part of its campaign, Consumer is distributing free Do Not Knock stickers to tell door-to-door sellers they’re not welcome.

A recent Consumer NZ survey found 70% of its members disliked door-to-door salespeople and wanted them to stop calling. Over 60% dubbed these traders “annoying” and “intrusive”.

Chetwin said everybody had an implied licence to enter property and knock on doors. “But,” she said “you can revoke a salesperson’s licence to enter your property by displaying a Do Not Knock sticker. If a door-to-door seller ignores the sticker, they’re likely to be trespassing.”

Consumer is also calling for changes to the Fair Trading Act to make it an offence for sellers to ignore a Do Not Knock sign. Australia has already strengthened its laws.

Door-to-door sellers there can be fined if they ignore a “Do Not Knock” sticker. Ms Chetwin said Consumer wants to see a similar law change here.

How to get a Do Not Knock sticker

More details of the campaign can be found at www.consumer.org.nz/donotknock.