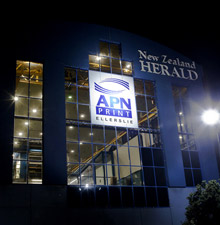 Under the arrangement, APN would provide printing services to Fairfax in New Zealand for several newspapers at its Ellerslie facility in Auckland’s south. This includes printing Fairfax’s Waikato Times, Sunday Star-Times, Sunday News and other community titles.

Work currently performed at Fairfax’s Auckland and Hamilton print sites would transition into the state-of-the-art Ellerslie facility within three months starting from August.

“Sharing a print site with a competitor is fairly common practice in overseas markets. In this instance we boost our print capability in the upper North Island market without the need for significant capital investment and gain significant benefits from the additional scale and efficiencies.

“Fairfax remains focused on providing high-quality journalism and content to our readers – across all platforms – including print. Where it makes sense, we will continue to invest in print, as we did recently at our Petone facility.”

APN ceo Michael Miller said: “Our conversations with Fairfax have been very positive and reflect similar optimism for the ongoing viability of printed newspapers, which continue to play a vital role in the communities they reach.”

APN recently consolidated the printing of a number of its New Zealand titles to its Ellerslie print site following a significant investment in upgrading equipment at the plant as part of the company’s 2013 $40 million publishing cost savings program.

Miller said: “The arrangement with Fairfax allows APN to utilise spare capacity at our state-of-the-art Ellerslie facility and deliver further cost savings. We are on track to achieve our target of a further $20 million in cost savings across APN’s publishing businesses in 2014.”