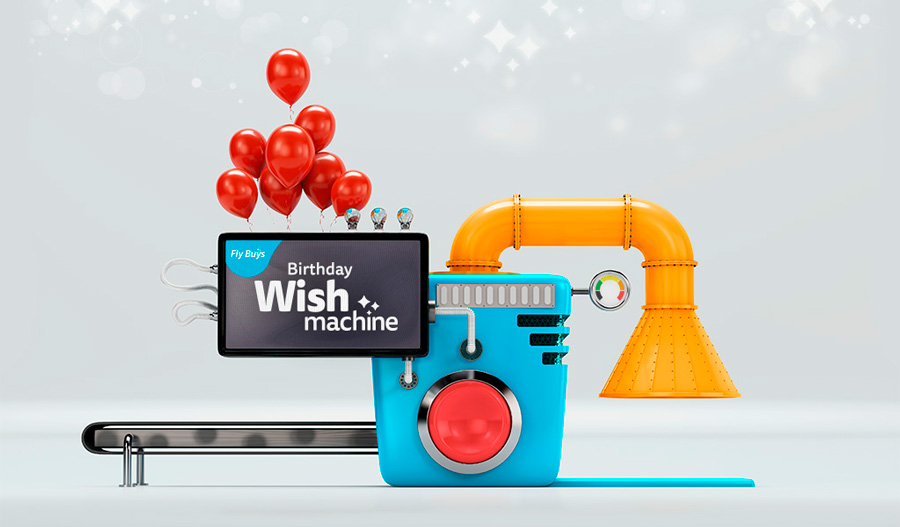 Members are sent a personalised email in the lead-up to their birthday and are invited to submit and share birthday wishes via the specially designed Fly Buys Birthday Wish Machine.

Loyalty New Zealand marketing manager Will Innes says a member’s birthday presented the perfect opportunity to do something unique and celebrate with them on a more emotional level.

Inspired by Heath Robinson
“Rather than a passive email acknowledging a member’s birthday, we wanted to create a really fun concept that would fire up the most imaginative birthday wishes, with the chance that it might come true,” he said.

The engaging kinetic design is a nod to English cartoonist and illustrator Heath Robinson’s fantastically absurd machines. “justONE has done a great job at bringing this concept to life,” says Innes.

justONE managing director, Ben Goodale said: “Nowadays, companies need to look at unique and different ways to connect with consumers to help them cut through the clutter.

“We wanted to do something outside the box, rather than the normal reward-based messages members typically receive on their birthday. Our brief was to develop a communications platform that surprises, delights and excites Fly Buys members on their birthday in a way in which Fly Buys’ personality could clearly shine through.

54% open rate
“We’ve had a very positive response so far – within 24 hours we had over 1500 submitted wishes and a 54% open rate for the emails, which is well above the industry norm. On top of that, approximately 10% are choosing to share their wish on Facebook.”

Will Innes said: “There have been a wide variety of birthday wishes submitted ranging from the practical and everyday, like having the power bill paid for a year, or a hot tub to ease someone’s back pain, to the more exciting, like  a ride around the track with Tony Quinn in his Vulcan car!

“Other member wishes have included something more meaningful like a trip to see their mother for Christmas in Ireland. Different things are important to different people. The Birthday Wish Machine doesn’t judge, it’s simply a way to show our members they are valued, with no strings attached.”

The Fly Buys Wish Machine allows members to see other wishes registered by members in real-time, with the option to post their wish on Facebook for their friends and family to see. This social element of the campaign gives members an opportunity to provide big hints to their loved ones without directly having to say what they are wishing for.