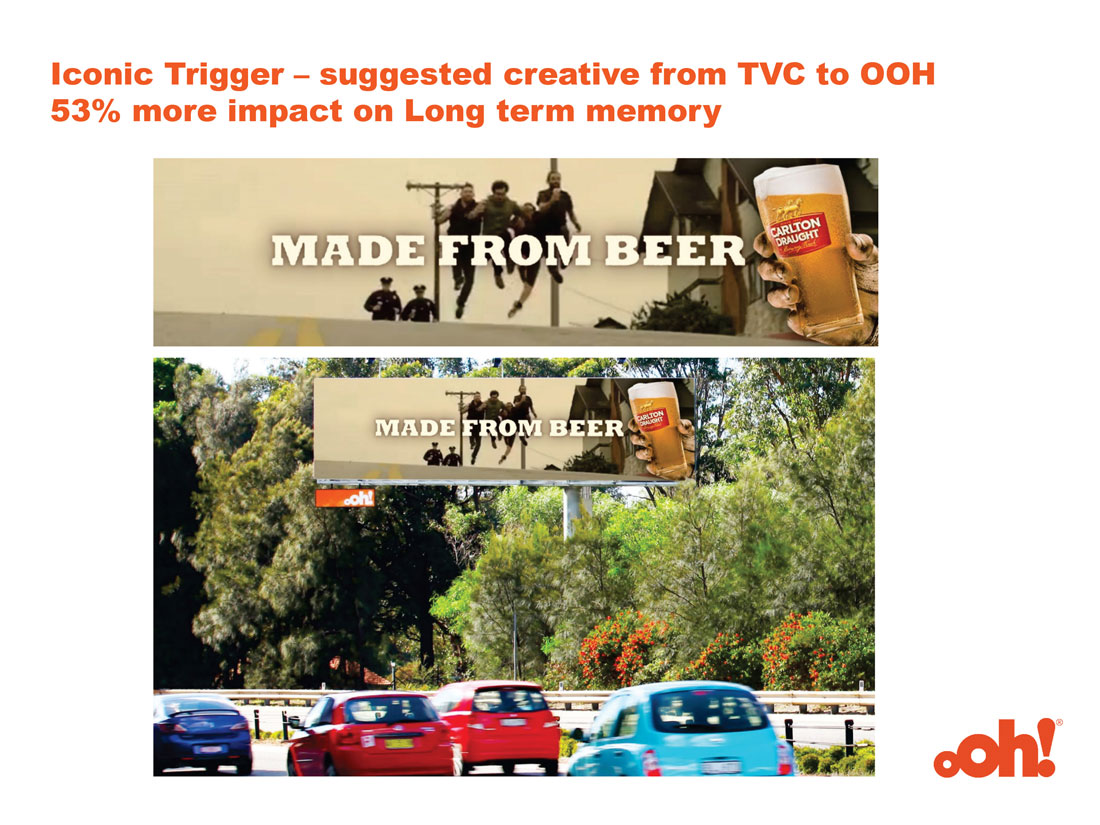 Australian and New Zealand advertisers can now increase the effectiveness of their out-of-home campaign by more than 40% by applying neuroscience to their creative, according to findings of a new Iconic Trigger research study.

The Iconic Trigger research by Neuro Insights, a world leader in using patented neuroscience technology to measure the effect of advertising and media content, was commissioned by Australasian out-of-home media company oOh!media.

The Iconic Trigger research is available through oOh!media to New Zealand agencies and clients.

The study found that by identifying the most powerful, or iconic, moment in TVC or video pre-roll and applying it to out-of-home environments, advertisers could increase a respondent’s long term memory measure by an average of 42%.

The findings are the result of testing 60 NZ and Australian commercials from the past two years with consumers to identify a TVC’s iconic triggers. Further neural testing was then conducted to identify the impact of using iconic trigger images in the out-of-home signage environment compared to other creative executions.

Carlton Draught’s award winning TVC The Great Beer Chase, for example, can not only be analysed to understand what the iconic moments are within the TVC but also demonstrate how to  utilise these moments on outdoor signage to increase the effectiveness of the campaign by tapping into the viewers long term memory.

CEO of oOh!, Brendon Cook, said the results showed that out-of-home campaigns using iconic triggers that were identified in their creative, produced more impact by tapping into consumers’ long term memory which is linked to enhancing the overall ROI of a campaign.

“This research provides advertisers with an actionable tool that identifies moments from their TVC or video pre roll, most strongly held in the long-term memory, which we know has a positive impact on ROI,” he said.

“Our Neuro Iconic Triggers tool removes much of the creative guesswork and gives clients the brain power to more accurately engage and influence growing audiences in out-of-home environments.

“In essence, it removes a lot of the guess work for clients wanting to take their TV campaigns in the many and varied out-of-home locations – from motorways to shopping malls, uni campuses, airports and cafes. The Iconic Trigger principle can be applied across virtually any products and campaigns in any category.

Peter Pynta, Director of Neuro-Insight, said: “Our research and testing has broken new ground by empowering advertisers to yield the best integration between TVC’s and Video pre-rolls with out-of-home media channels.

“This approach is grounded in decades of neuroscience evidence on the way the brain stores and retrieves experiences – with the recent addition of some very specific TV and out of home advertising campaigns.”

One of the ads used in the testing was Carlton and United’s The Beer Chase. To illustrate the story, above and below are three graphic images – the neural test peaks and matching images, the most recalled image in an OOH location, and the comparative recall scores for the three top Iconic Images from the TVC. 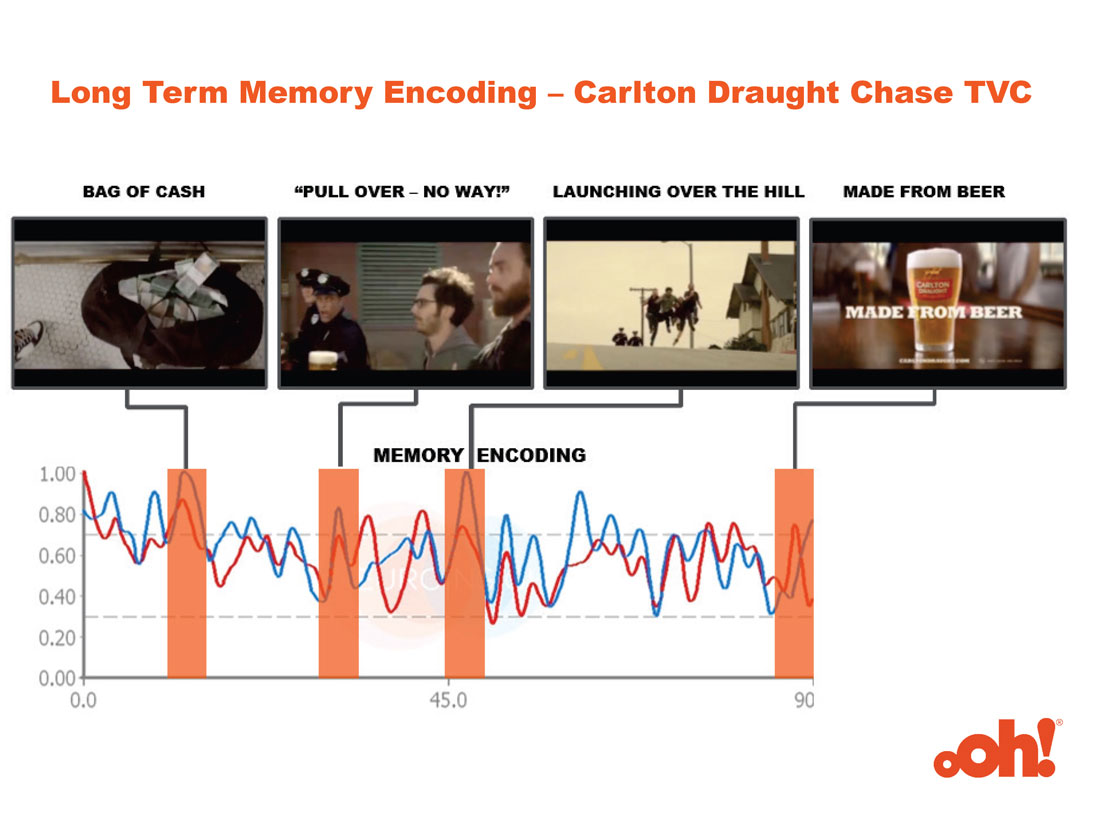 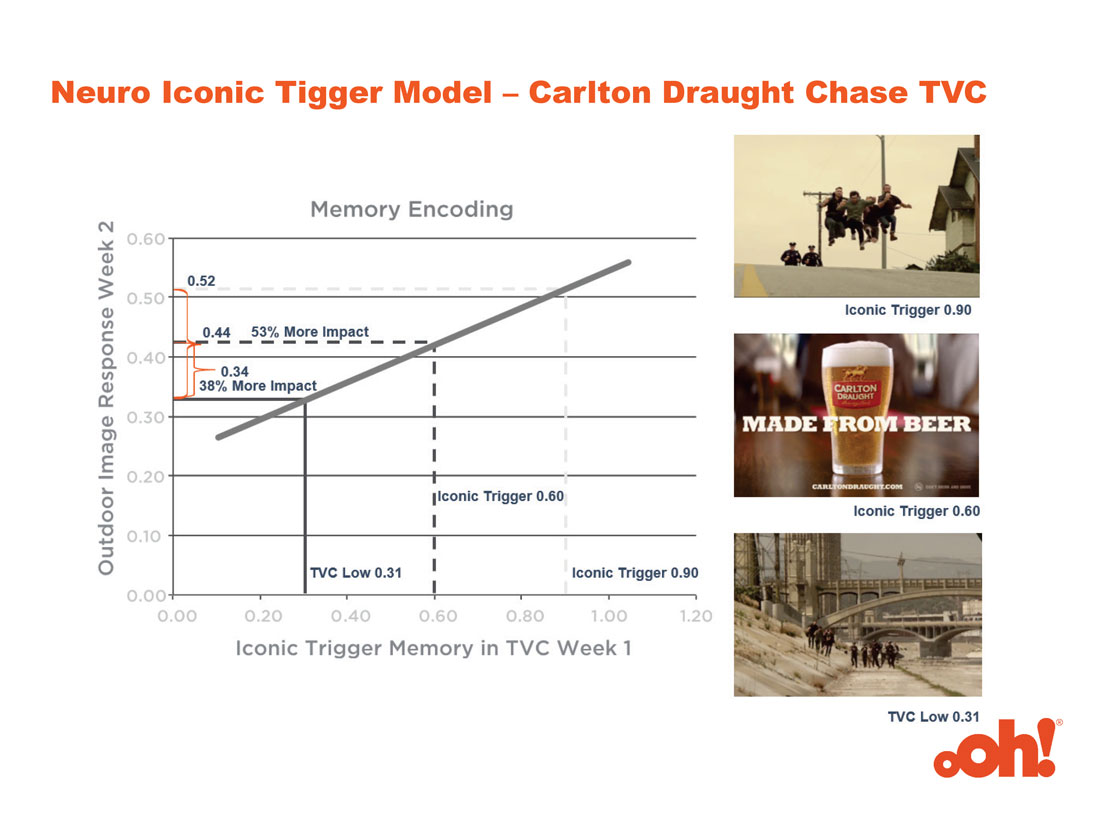 About the Neuroscience Iconic Trigger Study

Focus groups were held to view television commercials, while the individual’s brain patterns were monitored. Then a week later the same respondents came back and were shown a series of images from the ads as well other random images on various out-of-home formats. Results showed on average, long-term memory increased the most for those outdoor scenarios that used the Iconic Trigger (vs those that didn’t). And through numerous studies, it is long term memory that can directly influence behaviour and drive sales.

The Neuro Iconic Trigger research findings from the last two years will be released in a whitepaper in the coming weeks. Watch this space.