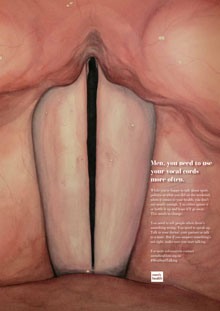 Men’s Health is continuing its confrontational campaign, which aims to remind men they need to “start talking about their health”. “The latest ad, again created by Dave King and Wicky Tafau, will certainly turn heads, which is the exact aim,” says Men’s Health chairman, Phil Clemas.

“The theme is Be More Vocal and at first glance many may jump to conclusions around the image they see. It is in actual fact a set of vocal chords blown up – but it does look like a vagina so there’s bound to be some people doing a double take when they see the advertisements initially.”

Clemas is unapologetic about taking this in-your-face approach.

“I doubt people will be offended but what we do hope is that men, in particular will start talking about the posters and most importantly about men’s health,” he says. “We are notorious for not discussing problems that are going on with our health, mainly out of fear. The statistics regarding the health of men are getting worse and now we’re in a situation where every three hours a New Zealand male dies of preventable causes. It’s time to start talking about our health.”

Dave King says the latest Men’s Health advertisement continues on the tradition of stopping men in their tracks.

“We want to disrupt their daily commute to work and make them think, ‘What the heck have I just seen?’ he says. “Hopefully it gets raised at work and the conversation will come around to men’s health and it will make them think about their own situation.

“‘When was the last time I went to a doctor?’, ‘I feel fine but should I still get a check-up?’ … Any conversation about men’s health will mean this campaign is a success.”

The posters can be found on billsticker sites across Auckland, Wellington and Christchurch from today.

If sharing the advertisement on social media the hashtag is #MenStartTalking