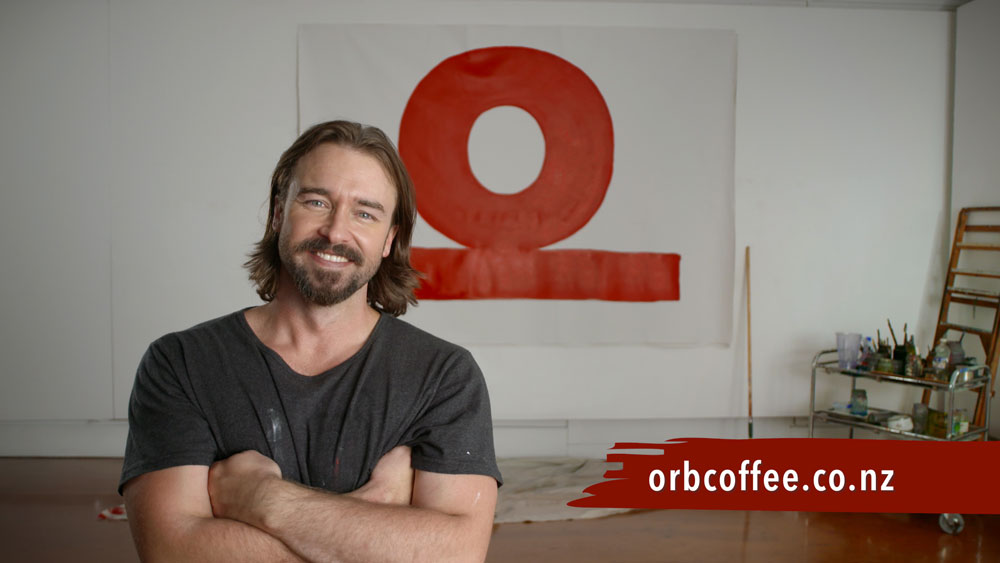 Viaduct Harbour-based visual content company BrandWorld has partnered with Auckland artist/actor/writer/director Dwayne Cameron to tell Orb Coffee’s story to the world, and spreading the news that Orb is now available in supermarkets.

Orb Coffee has won over 18 awards at the hotly contested NZ Coffee Roaster Awards including being one of only two brands to win the Supreme Award twice as well as five gold medals.

Orb Coffee (“sourced from some of the best coffee-growing regions in the world”) is now in supermarkets and who better to tell the story of the art of good coffee than an artist, says BrandWorld senior producer Rachael Weaver. “Dwayne is a real talent. His art is amazing. He quickly understood how to help us capture Orb Coffee’s amazing story and tell it in an incredibly powerful way in a very short time.”

Sean Wiggans, group brand manager, coffee for Cerebos Gregg’s, says partnering with Dwayne Cameron was an inspired way of underlining the craft that goes into making Orb Coffee. “The presenter was always going to be key to telling the story we needed to tell,” he said.

BrandWorld’s Orb Coffee story went to air through BrandWorld’s Discover platform last week. It will run for a number of weeks.

The 15sec version below

And the 30sec version

About Orb Coffee
Orb’s challenge to itself is to be The Best Damn Coffee in the Civilised World. It’s a high bar because the people at Orb understand that making a truly great cup of coffee is not easy. To achieve its goals it sources some of the best beans in the world from some of the best coffee growing regions of the world, including the famed Yirgacheffe region in the lush highlands of Ethiopia, the birthplace of coffee, and the Morobe region in Papua New Guinea; it exclusively uses single origin beans for its plunger and filter ground coffee; it has developed blends of coffee through repeated trial and error that deliver outstanding flavours even through the espresso process; and it has worked hard to perfect the best roast level for each of its single origins and blends to deliver coffees that will delight coffee lovers around the world. It must be doing something right because so far Orb has won 18 awards at the prestigious New Zealand Coffee Roaster Awards, including five gold medals. After picking up the Supreme Award at the 2014 awards for the second time (2006 and 2014), it is now only one of two brands to have won the Supreme Award twice.

Dwayne Cameron has painted and sketched since he was 10 years old. A sketcher, sculptor and painter, he was lined up to attend Elam School of Fine Arts in 1997 when he landed his first television acting role playing Selma Blair’s boyfriend, Leon, in the television movie Amazon High. A few months later he was cast as the lead in William Shatner’s A Twist in the Tale. Other acting roles include The Tribe, Street Legal, Mercy Peak, Power Rangers, The Cult, Legend of the Seeker and Agent Anna as well as four feature films both here and overseas, including Kiwi hit The Locals. Cameron has continued to paint throughout his acting career and his travels, producing more than 500 paintings and attracting a number of prestigious collectors including, recently, Sir James Wallace. He has had art studios in Los Angeles, Auckland and Sydney and has written more than a dozen short films and three feature film screenplays. He has also directed, produced and starred in three of his own short films; ‘Charlie Has a Face’, ‘Pleroma’ and ‘Holding The Sun’, all produced by his production company, Dancing Mind Films. ‘Holding the Sun’ was accepted into the 2013 Cannes Short Film Corner and was nominated for Best Short Film and Best Production design at the 2013 New Zealand Film Awards.

BrandWorld has become a world leader in visual content marketing through its platforms Family Health Diary and Discover as well as a multitude of bespoke offerings including The Mix, Made-to-Match and Food in a Minute. Many of BrandWorld’s products have boosted products sales for clients by more than 200%. BrandWorld prides itself on being innovative and offering truly effective solutions to clients by combining programme-making skills, that can really bring stories to life, with real research showing what consumers want. The company was the first New Zealand advertising company to offer clients cost effective, fixed cost packages; the first to aggregate multiple clients in a common advertising format; and the first to retain ownership of its own advertising “brands.” Its offerings have won countless marketing awards for clients. For more information visit www.brandworld.co.nz