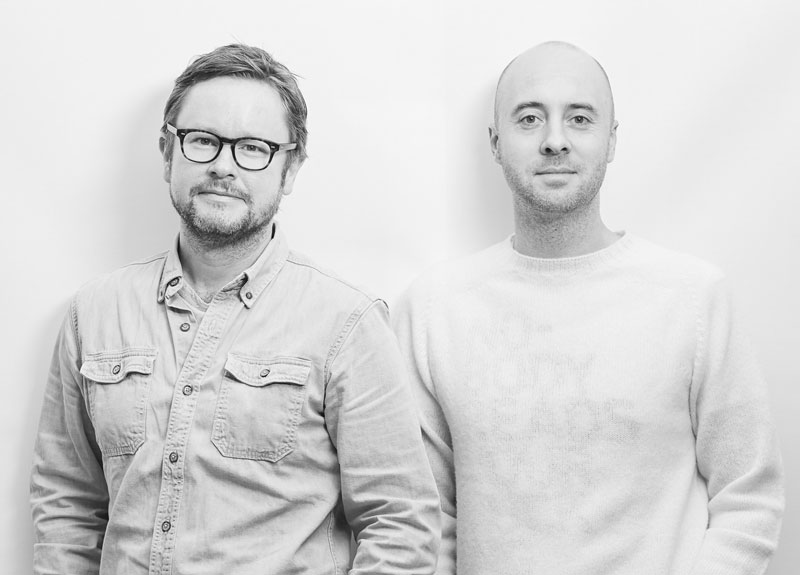 French awards organiser Epica has shone a light on the work of two Kiwi creatives – Mark Forgan & Jamie Standen – who have been making waves since they left Clemenger BBDO Wellington in 2007 to head for Europe.

Their first gig was at Y&R Paris, but it was at boutique shop Rosapark Paris where they really found their feet.

“Each month we profile a creative talent in the news,” says Epica editorial director Mark Tungate. “This time we have two guests: Mark Forgan and Jamie Standen, who travelled all the way from New Zealand to make their mark on France.

“At Rosapark, they’re working on some of the country’s best-known brands.”

Here’s the Epica profile in full:

Global Headline Makers
Feel like quitting your perfectly good job and heading off to look for another one in a place where you don’t even speak the language?

If you’re in any way tempted, you may want to seek advice from Mark Forgan and Jamie Standen, creative directors of Paris agency Rosapark. The pair left New Zealand in 2007 with little more than a portfolio and a sense of adventure between them.

Well, not quite: they also had experience and talent, having worked at Clemenger BBDO in Wellington for more than five years.

“The decision was easier than it sounds,” says Jamie. “In New Zealand it’s normal for people to travel. New Zealand is a long way from anywhere, so it can feel quite isolated. Most students take a gap year to see the world, for example.”

Pizza paid the way
The pair actually met as students, by the way: they worked together at a pizza restaurant while they were at university. When they weren’t tossing dough the pair were putting a portfolio together – which led directly to a job at BBDO.

Mark says: “Working in advertising in New Zealand you can move up quite quickly – there’s no real hierarchy. We were put on the best briefs from day one. We learned to really push ourselves, so that by the time we left for France we had quite a senior portfolio.”

Paris felt richer culturally. “Plus there was a lot of good work coming out of Paris at that time, so it wasn’t an entirely random choice.”

He mentions the French accent on craft, something he also equates with Rosapark’s home in the bohemian 11th arrondissement, where there are still artisans who restore moulded plaster ceilings and antique mirrors.  “It’s great to be in this area of Paris – first because there are no other agencies, but also because it’s very artisanal, very craft-minded.”

Rosapark has been in its current home for three years now and is around 80-strong, working on brands such as trans-European train service Thalys, supermarket chain Monoprix and domestic appliance retailer Boulanger.

For the former, the Kiwi pair came up with the surprisingly poetic Sounds of the City campaign, which turned a billboard into an aural journey. (Scroll down to see the video.)

Jamie continues: “I think it’s become a statement for an agency to actually be in Paris. The big networks tend to be based outside, while the more boutique agencies, for want of a better word, are in the city. It’s a totally different feeling.”

The pair know what it’s like to work for a big network: their first job in Paris was at Young & Rubicam. Mark says: “There was a collective of creative directors there called Les Six. It was a new concept and since we were something new, they warmed to the idea of having a Kiwi creative team on board.”

Their next stop was CLM BBDO, where they worked on Pepsi International, covering every market outside the US. As native English speakers they were a natural fit, and often found themselves flying to New York to present work.

‘As soon as you’re comfortable, creativity stops’
But two years later it was time to change direction again – and they left CLM with its executive creative directors Jean-Francois Sacco and Gilles Fichteberg, who had joined forces with former Publicis president Jean-Patrick Chiquiar to launch Rosapark Paris.

“Once again people thought we were crazy,” says Mark. “We’d come all the way from New Zealand and we were about to be made creative directors on Pepsi. But we knew it would be more exciting to launch a new agency. We didn’t hesitate for a single second. As soon as you’re comfortable, the creativity stops.”

The agency isn’t deliberately named after Rosa Parks, the American civil rights activist. Mark says: “The guys wanted to name it after an urban location, and they liked the idea of ‘park’. Then they felt that ‘rose park’ or ‘rosa park’ made it feel a little less masculine, since they were three guys. The link to Rosa Parks was almost incidental.”

So what’s their pitch, as an agency? “We often talk about contact,” says Jamie. “As we’re a smaller agency, clients can pick up the phone and get straight through to us. It’s quite an obvious claim but I think it’s more and more appreciated.”

Dark humour
In fact, the agency seems to specialise in combining funny with touching. Even serious subjects are treated with an edge of dark humour, such as the campaign for the Tribord life vest, which used a new drink called Wave – which tasted of seawater – to give people “a taste of drowning”. (Scroll down to see the film.)

They’ve also been instrumental in breathing new life into Marionnaud, the French fragrance retailer that was struggling to differentiate itself from its rival, Sephora. They did so by suggesting that Marionnaud offers a more nuanced approach to beauty, beyond the conventional.

Jamie and Mark are still Kiwi enough to hold regular barbecues on the Rosapark roof – but they’ve successfully established the agency as the voice of some classic French brands.

Epica is a global ad awards site driven entirely by trade journalists. And – as we seem never to tire of reminding readers – M+AD ed David Gapes is a permanent jury member.