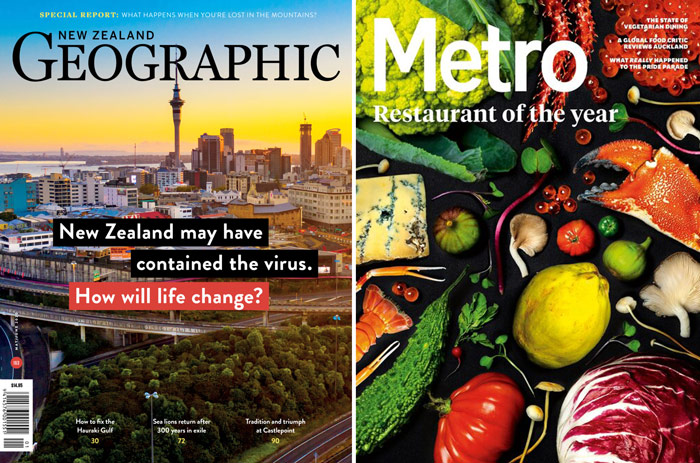 AUCKLAND, Today: The Voyager Media Awards judges chose Bauer’s Metro as a 2020 Magazine of the Year – a popular decision, announced in an online screening on Friday.

Publication of the legendary title, of course, is currently suspended until a buyer steps up to claim it, presumably for a song.

Kowhai Media’s current publishing sensation New Zealand Geographic was named alongside Metro as co-winner of the Magazine of the Year Award.

“The judges found it impossible to make a call between these two stand-out titles,” said the judges (via a Voyager release).

“NZ Geographic is a class magazine with superb writing and visuals, and a portfolio of cross-platform offerings that amplify the brand and make it a national taonga.

“Stuff’s Waikato Times won Newspaper of the Year (up to 30,000 circulation); the Sunday Star-Times was Weekly Newspaper.”

“Metro, though, impressed us with its achievements in award year. Sassy, challenging and visually surprising. Some smart events and clever ideas for ad integration mean it achieves a lot with limited resources.”

The New Zealand Herald named Newspaper of the Year (for the 10th time in 13 years), and Website of the Year.

The judges said: “Ultimately, we could not look past the New Zealand Herald’s consistency and comprehensiveness and its record of setting the news agenda with incisive daily journalism. The Herald is a strongly-edited paper with a depth of content that sets it apart.”

Slack PR
The Voyager PR people don’t make it easy to access their prize-winners, requiring category downloads (a tiresome process – scroll down for the link).

Nor do they issue a general trade release.