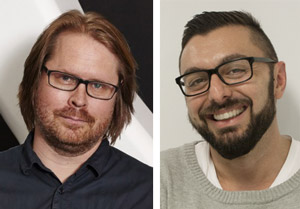 Saatchi & Saatchi has announced the appointment of Mike Spirkovski as ECD of its Sydney office, filling the vacancy left by Damon Stapleton when he defected to a CCO role at DDB Auckland.

Spirkovski, who was previously at Iris Sydney, starts at Saatchi Sydney on July 7; Stapleton (who announced his departure from Sydney back in April) starts at DDB NZ on July 1.

“He has the perfect blend of humility and hunger that will be an inspirational force in the hallways of 70 George Street.”

Spirkovski has been in the advertising business for 15 years, and has worked at Droga5, Clemenger BBDO Melbourne, Leo Burnett, and the agency he founded, Cassius Clay.

As you’d expect, he’s highly awarded, including a Titanium Lion and back-to-back gold, silver and bronze Lions at Cannes. He’s done creative work for Adidas and the All Blacks, and was co-creator of the Earth Hour initiative.