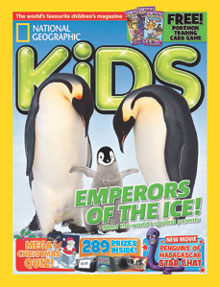 “Each new market brings with it an opportunity for us to connect with a fresh audience of kid, but as we’ve learned, all kids – no matter where they’re from – have an innate sense of curiosity and adventure,” says Melina Bellows, chief education officer for National Geographic.

Aimed at boys and girls aged six to 14, National Geographic Kids magazine is a photo-driven publication that aims to inspire young adventurers to explore the world. The Australian & New Zealand edition will include fun facts, features and trivia highlighted by engaging stories about animals, science, nature and human achievement. Content from around the world will be specifically geared to local readers.

Approximately 25,000 copies will be produced monthly (12 issues per year) and will be available on newsstands or by subscription in print for a cover price of NZ$6.99.

“While still exploring news from around the world, we also want to inspire kids with local stories about nature, cultures and discoveries. National Geographic Kids is a trusted brand, we’re expecting to attract an inquisitive audience, hungry for fun, meaningful and fresh reading material about our planet, its diverse wildlife and people.”

National Geographic Kids magazine has seen real success since its launch in 1975 in the United States as National Geographic World magazine. The Australian/New Zealand edition is the 18th local-language edition of the magazine, preceded by the Azerbaijani edition in February 2015. Other local-language editions are available in Bulgaria, China, Egypt, Germany, Indonesia, Israel, Italy, Latin America, Lithuania, the Netherlands, Slovenia, South Africa (Afrikaans and English), Spain, Turkey and the United Kingdom. National Geographic Kids has a worldwide circulation of approximately 1.7 million.

With a mission to inspire, illuminate and teach, the National Geographic Society is one of the world’s largest non-profit scientific and educational organisations. The member-supported Society, which believes in the power of science, exploration and storytelling to change the world, reaches over 600 million people each month through its media platforms, products and events. National Geographic has funded more than 11,000 research, conservation and exploration projects, and its education programs promote geographic literacy. For more information, visit www.nationalgeographic.com, and find us on Facebook, Twitter,Instagram, Google+, YouTube, LinkedIn and Pinterest.