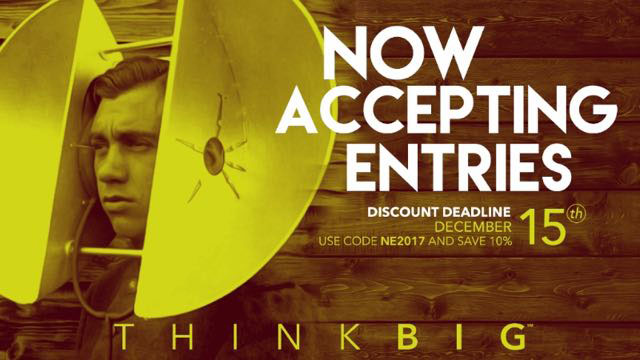 Entries submitted by Thursday 15 December can save 10% of the entry fee by using the code NE2017.

All entries are judged by 400+ members of New York Festivals executive and grand juries, a brains trust of global creative minds who collectively will cast over 400,000 votes to select the World’s Best Advertising.

For the 7th year in a row, the 2017 executive jury, an elite panel of 24+ high-level chief creative officers, will meet together in New York April 7-11 to select the winners from the shortlist selected by the grand jury during five days of live judging sessions.

The 2017 executive jury and grand jury will be announced in the coming weeks.

New York Festivals president Michael O’Rourke said: “NYF’s world-class juries are respected around the globe for their breakthrough creative work. These reflect the diverse range of creative expertise in the industry today, and their dedication to their craft, along with their ability to recognise trends and innovations ensures each entry is evaluated with the utmost attention.”

The 2017 New York show creative panel sessions and networking events will take place on Thursday 18 May at the NYIT Auditorium, 1871 Broadway, between 61st & 62nd Street. The annual awards ceremony and gala will be held that evening at the world-class performance space, Jazz at Lincoln Center’s Frederick P. Rose Hall, Broadway at 60th Street, New York City.