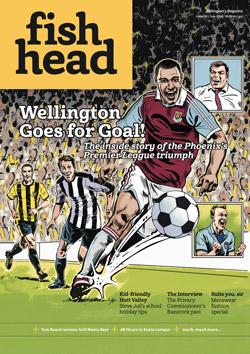 Newish Wellington lifestyle print magazine FishHead stood head and shoulders above the crowd in last month’s Nielsen Readership report – by posting a remarkable 20% gain. What? How? And where did you get that name? M+AD talked to editor Dan Slevin …

Tell us about FishHead? What’s your objective? What motivated you to start it?

FishHead was started just over four years ago by Jack Martin and Richard Aindow who had achieved great success with WildTomato magazine in Nelson.

They believed that a regional lifestyle magazine would work in the greater Wellington (Wellington, Hutt Valley, Porirua/Kapiti and Wairarapa) region and it has only taken four years for them to be proved right.

Every city deserves a decent monthly magazine, to have its stories told, its people profiled, its issues discussed, its pictures taken, but for some reason whenever anyone tried it here before they weren’t able to sustain it. We have been around long enough now to have spawned some competition which is gratifying if slightly annoying.

When we grow up we would love to be Metro but we all know there’s a lot of work to be done to get there. In the meantime, we just continue to add readers, grow our advertiser base, work extremely hard on distribution and find great stories to tell.

FishHead has achieved something most print magazines these days only dream about – a 20% increase in readership. What’s the secret?

Well, we started from a pretty low base. The potential readership in the region is huge but without the resources of the big multinational media companies we have had to grow organically over time. The magazine started as a bi-monthly publication and went monthly in June 2012. That gave us a big push.

We’ve been working extremely hard over the last six months on distribution, believing that the best advertisement for the magazine is having an actual copy in your hands. Our name recognition in the city is extremely strong.

You’ll find FishHead in every 4 star+ hotel room in the city and we now have great placement in the airport bookstore, right next to North & South and the Listener.

The magazine got a facelift earlier this year with a complete redesign and our covers now really stand out among the competition. That has boosted sales which in turn has boosted subscriptions.

My job is to continue to find good writing so that the written content is as strong as the design and the photography. 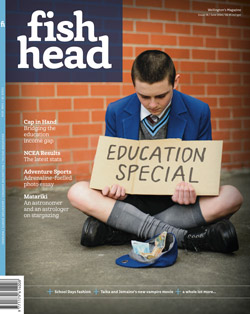 How will you maintain this momentum?

We still have very little resource for marketing so we do lots of targeted giveaways and comp subscriptions as well as subscription promotions with our clients – free six month subscriptions if you become a New Zealand Home Loans customer, that sort of thing. We are doing some extra retail activity with clients and allies, getting the magazine on to counters and by POS even at non-traditional locations.

Over the next few months we will be attempting some mailbox drops to targeted suburbs along with a subscription offer. We find that a $75 annual subscription is a popular gift for Wellingtonians who have left the city for some reason and a third of recent sub sales have been to the rest of NZ and Australia.

We support a lot of community events, too, and magazines seem to be a pretty popular item in goodie bags.

Not much up to now as the site is in dire need of a revamp to match the one that the magazine has just had.

We’re working on it. The plan is for a semi-paywalled site with lots of bonus non-magazine content updated on a daily basis by busy young interns. There’s a lot of information that crosses my desk that is too late for our deadlines or not appropriate for the magazine but that we still want to share.

The website is where that will happen. In the short term it will be a place for magazine advertisers to get some bonus banner advertising but in the longer term we hope that there is a quid or two in it.

How many people in your team? Who are the key ones?

I am the only full-time editorial resource. We are very lucky in Wellington in that Whitireia and Victoria University are running actual internship courses so we make good use of journalism and media studies students looking for experience. Otherwise, editorial content is delivered by capable and talented freelancers.

We have two ad sales execs (Vivienne Brown, ex-City Voice, and Cooper Gyles) working out of Wellington. Design and finance are managed out of Nelson from the WildTomato offices – each magazine gets two weeks of the design team a month and we make great use of Dropbox, Google Docs and Skype.

I’m not sure that it could be done without those shared resources.

Are you making money? How much?

We are a break-even business at the moment but revenues are growing and prospects are good. The plan is to grow the page count as well as deliver a return to our owners – to continue to invest in the product. It would be nice to pay our contributors a little bit more. They are bloody good.

Our readership numbers are now at a stage where we should be on the radar of some national brands and agencies wanting to get in front of well-heeled Wellingtonians. These are people who spend and they spend on the good things of life. It would be a shame if agencies didn’t look further than Metro when it came to magazine advertising, particularly as our rate card per thousand readers is actually cheaper than theirs.

Luckily, brands like Working Style are paying attention and they have taken a couple of back covers. We look after our clients with editorial too – we only do a limited amount of pure advertorial but our friends tend to jump to the front of the queue when they have a great story to tell.

The biggest challenge is switching off. As editor I am responsible for managing the sales team, distribution, budgets, HR, even changing the light bulbs and emptying the bins every Friday night. I’m trying to keep a few other projects alive (I still review cinema for Radio New Zealand every fortnight for example) or it would devour me but I’ve truly never been happier.

I love this town and this gig allows me to meet the people who make it special and then tell their stories. What could be better?

Oh … and, how did you dream up the name?

Apart from the occasional confusion for a fishing magazine (hence the otherwise inexplicable sales we make in Greymouth), the name is memorable one. It comes from the Maori name for Wellington – Te Upoko o te Ika or The Head of Māui’s Fish. So, now you know! 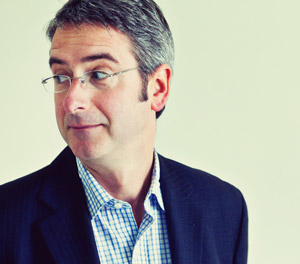