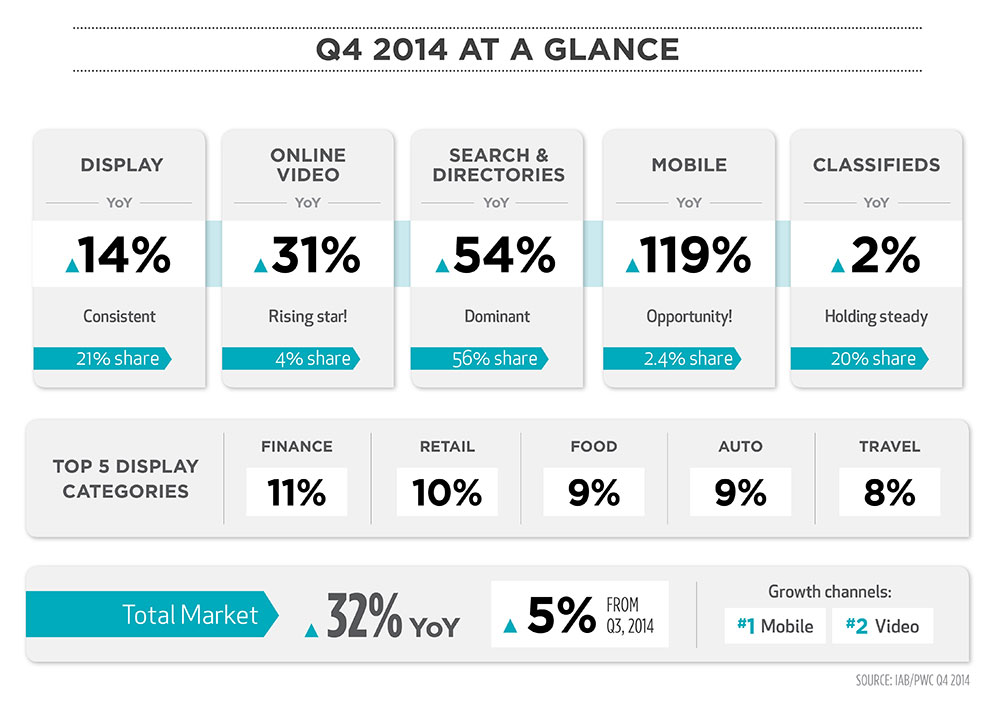 In 2015 advertisers will be unable to achieve mass reach without Digital, according to the NZ Interactive Advertising Bureau. Digital advertising’s explosive growth continued unabated in New Zealand in Q4 2014, reaching a record $168m (a 32% year-on-year increase), according to the latest IAB/PwC Revenue Report.

Search & Directories increased by 54% over the same period while Video revenue also reflected significant growth (31%). Mobile revenue continued its surge by posting a 119% increase, albeit off a smaller base.

The full year 2014 figures are equally impressive with the industry posting a 25% increase year-on-year. The $589m total spend superceded expectations and almost certainly puts the Interactive industry head-to-head with Newspapers in terms of advertising share for 2014.

“While the surge in Mobile advertising is impressive, it’s worth noting that the increase is off a small base and the sector holds 2.1% of the digital advertising spend,” says IAB ceo Adrian Pickstock. “This is significantly less than mobile share held in the US, UK and Australia.”

Display advertising is the fastest growing category in the UK’s digital sector – this is fuelled by increases in Native and Video spend which together form 42% of the Display spend.

Display advertising in New Zealand increased by 14% in 2014 which is good news at first glance, Pickstock said. “As in the UK though, this growth is coming largely from a strong move in video spend. The reality is that General Display advertising, net of Video and Programmatic revenue, had declined by 10% compared to 2012.

“Overall, the Q4 and full year 2014 interactive revenue figures reflect the growing dominance of the sector. As a consequence, advertisers in New Zealand will be unable to achieve mass reach without factoring Digital into their plans.”