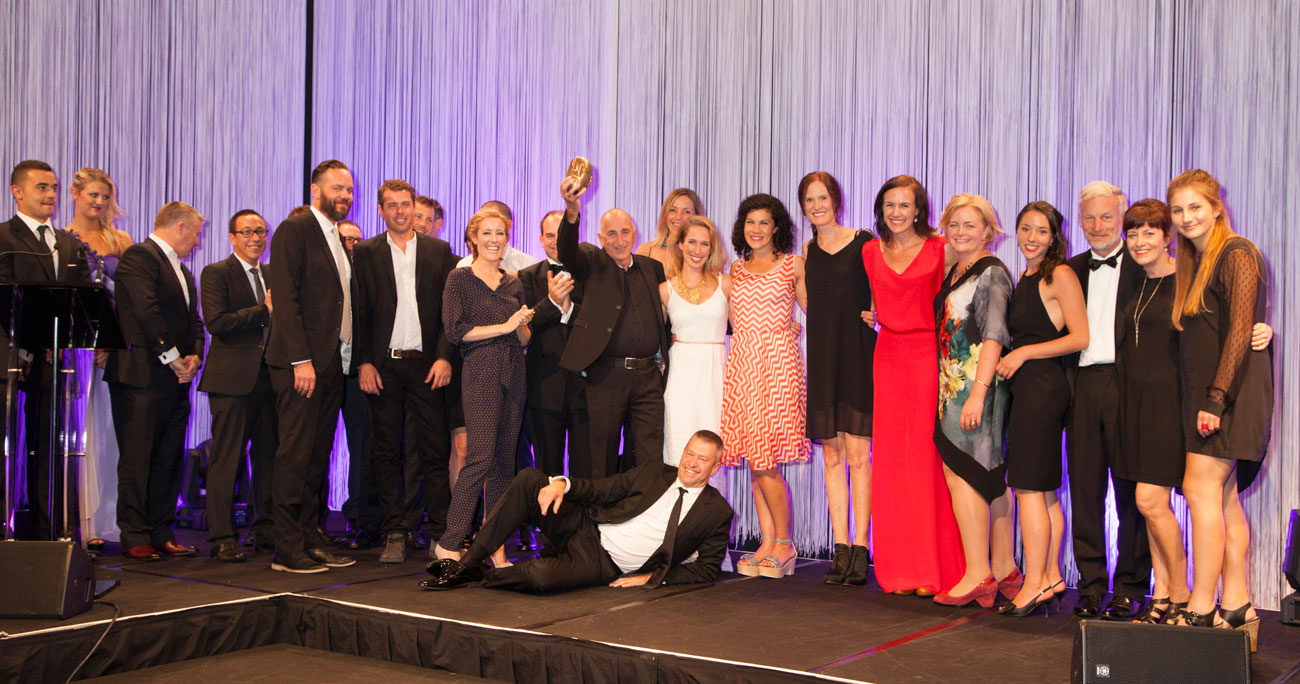 At a sell-out event at SKYCITY Convention Centre in Auckland last night, emceed by the terrific Jesse Mulligan, 800 advertising people came together to celebrate the industry’s best creative work of the past year.

The Grand Axis was awarded to Clemenger BBDO for their New Zealand Transport Agency film Mistakes. The trophy will sit alongside the Grand Prix the film was awarded in Screen Content and Craft and the other two Gold Axis awards Clemenger BBDO received. Method Films and Finch also benefited from this piece of work with their Golds in the Craft category for Editing and Direction.

Special Group did well across the board winning Gold for Smirnoff with their Instagram Your Fridge campaign in Direct.

Colenso took out two Golds for their Breast Cream work and for the brilliant K9FM Radio which had everyone laughing.

But the work that had the teams going up and down the carpet, though was DDB as they amassed metal, picking up a whopping eight Golds and three Grand Prix. DDB Group were then named this year’s Creative Agency of the Year (calculated on points awarded for finalists and/or metal won on the night).

Justin Mowday, DDB’s CEO, said: “What a fantastic result to be named Creative Agency of the Year and to have Lion announced as Creative Business of the Year, plus receive a ton of metal across a whole range of our clients. This rewards the quality of work our guys produce year after year, for all our clients, no matter the task, budget or challenge. We put a lot of effort into making sure we have the very best people at DDB, and alongside CCO Damon Stapleton, ECD Shane Bradnick and Lucinda Sherborne (head of planning), we’re building something pretty special at DDB.

“We’ve celebrated a lot of big wins as an agency over the past year and it’s great to see that continue at Axis. There’s simply no way we can be at our best as an agency without smart, trusting and brave clients, which we are grateful to have at DDB. The standard of work in New Zealand is always very high, so we’re honoured with this result.”

Damon Stapleton was a jury chairman at Axis this year and knows first-hand how high the standard of work is in New Zealand. “What’s pleasing is not only to do work across various channels, but also harnessing a big idea’s power by making all the parts work together. This is what we did for Steinlager Pure Live Dive,” he said.

Creative business of the Year went to Lion, and The Sweet Shop celebrated four consecutive years as Production Company of the Year.

The very cool Jeremy Taine was honoured with a Lifetime Achievement Award, a highlight of the evening that was met with a standing ovation.

Jeremy Craigen from DDB London, Matty Burton from Special Sydney and Mark Harricks from VCCP Sydney flew into Auckland earlier in the week, and joined the five local jury presidents on the executive judging panel.

Their role on the night was to award the final metal which included a total of 27 gold category Axis Awards. They enjoyed the gig and noted that there was a high standard of work which should represent New Zealand well on the world stage.

“Axis has always been the pivotal moment in the New Zealand creative calendar because it is a celebration of our best creative work; the work our industry is most proud of because it has broken the rules, permeates popular culture and influences behavioural change,” said CAANZ ceo Paul Head.

“And the winners this year are all great examples of those attributes.”