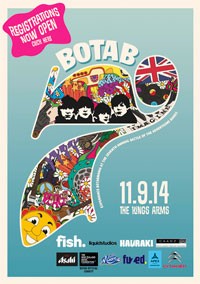 There’s only one event in the advertising calendar that can transform even the most gracious group of CAANZ members into a raging, uninhibited pack of blood-thirsty rock gods.

That is of course, the annual Battle of the Ad Bands competition, where agencies battle it out in a creative exchange of egos and music ability.

Registrations are now open for 2014. Cost of registration is $300 +gst per band; register at botab.co.nz or by emailing office@caanz.co.nz.

“So this year’s wildcard theme is The Beatles. Bands will perform one original, one cover and a Beatles wildcard song of our choosing, which will be revealed a couple of weeks before the event.

“Thanks to Barnes, Catmur & Friends for this year’s creative. Celebrity judging panel, MC and prizes will be revealed closer to the date of event.

“This year Flying Fish and CAANZ have proudly adopted The New Zealand Music Foundation as BOTAB’s official charity partner. The foundation will be donating some exciting music industry gems to auction off on the night, which we’ll be announcing at a later date. Stay tuned.”