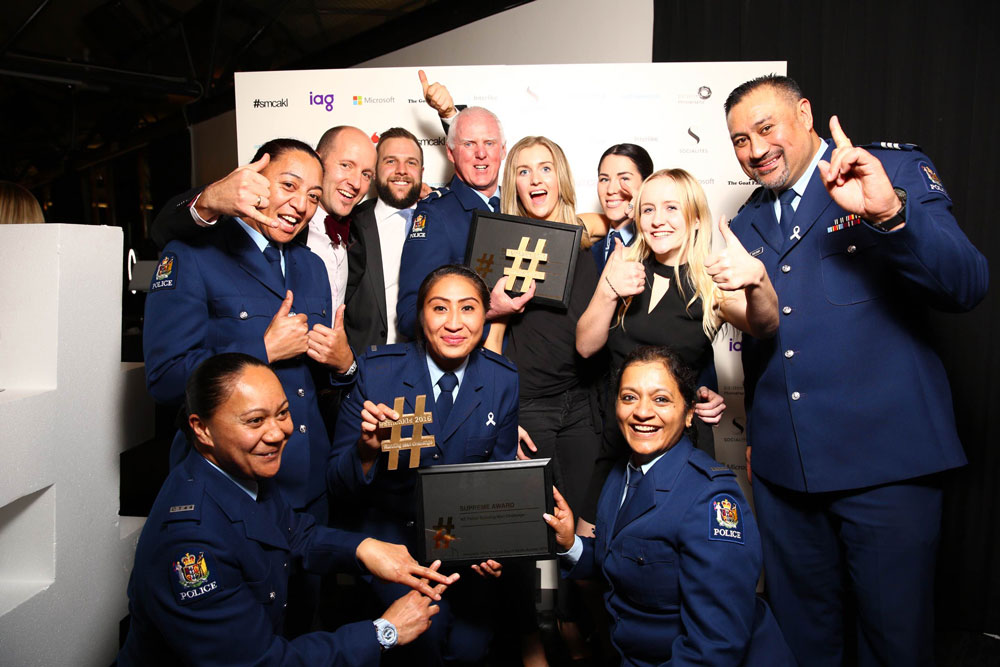 The NZ Police Running Man video has gone from viral hit to surprise award winner. Some of our best and brightest marketing and social media people gathered in Auckland last night for the third annual New Zealand Social Media Awards, the #SMCAKLs.

NZ Police won the Supreme Award for their Running Man Challenge video – described by judges as “an absolute viral sensation”, which generated more than 30 million views and inspired remakes from all over the planet.

The dance challenge started around May this year by two American high schoolers who were bored in finance class. In an appearance on The Ellen Show, Kevin Vincent and Jeremiah Hall said they came up with the dance, which has revived the 1995 hit “My Boo”, and then posted it online.

Within weeks the challenge went international, spreading first through the NFL, NBA, before being picked up by a group of New Zealand cops.

The #SMCAKLs celebrate the very best of social media in the country and this year’s finalists set the bar higher than ever, says judge coordinator Ken Freer, marketing director at House of Travel.

“The quality of entries this year was simply outstanding and showed just how much the use of social media in New Zealand has matured. And the fact that many of the campaigns, including the Supreme Awards winners, received global attention, shows what we’re doing here in New Zealand is truly world-class.”

Police national manager brand and engagement, James Whitaker, worked on the project and says they’ve been blown away by the response to their Running Man video.

“This wasn’t primarily a recruitment initiative. It was to show who we are, our personality and sense of humour. But it’s those things that make people more likely to want to join us.”

Mr Whitaker says there have been thousands of positive responses and one of his favourite threads was when someone commented, “The police aren’t robots, they’re just like me”.

Earlier this year he said: “ when you typed NZ Police into Google, the first word that came up was dance and that makes a nice change from infringement.

See the appearance on Ellen

About the #SMCAKLs
The New Zealand Social Media Awards are presented by the fun and bubbly people who put on the monthly Social Media Club Auckland (yes, also called #smcakl!). Each month they gather to “meet someone cool, drink something cold, and learn something new” about all things new in media, digital and social. For more information, visit: