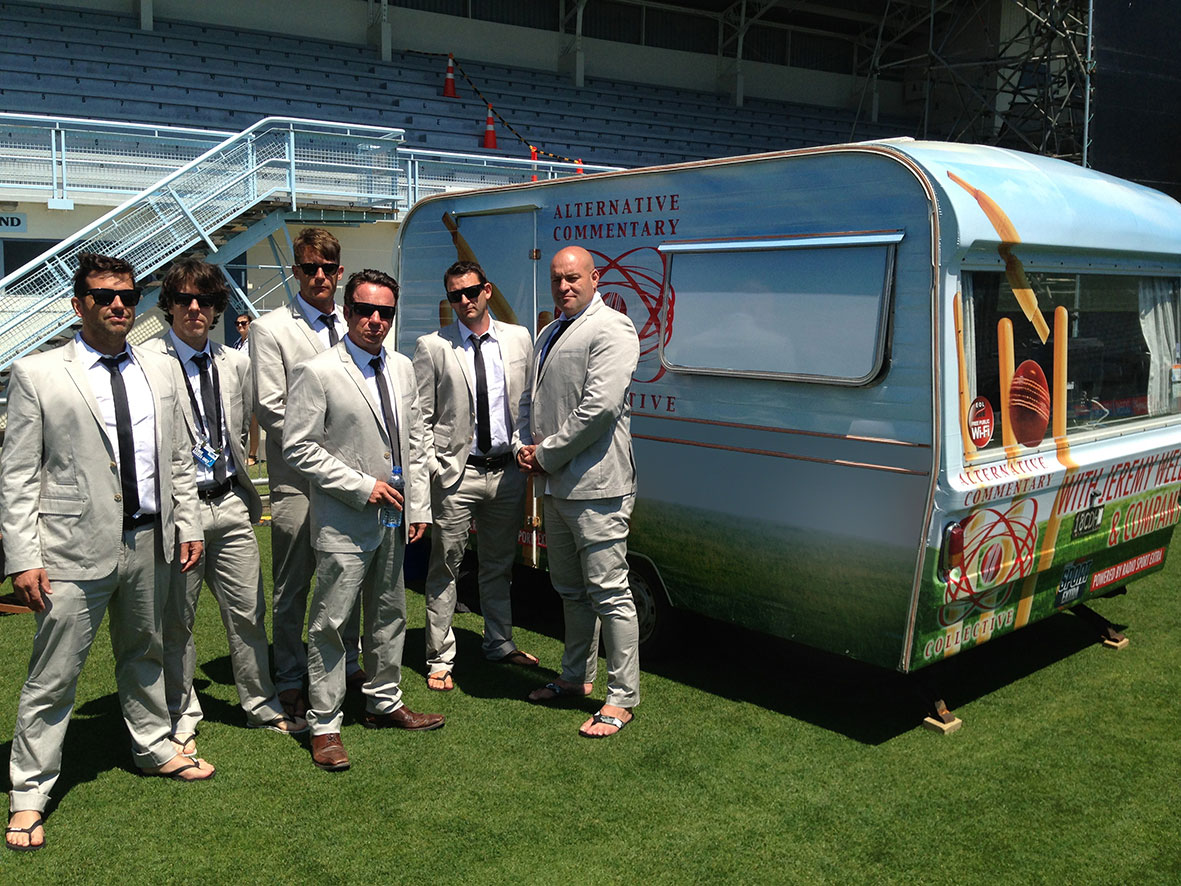 The caravan-loving cricket tragics that comprise the Alternative Commentary Collective are back in bad suits for their third series of international cricket, and will be on the boundary ropes for the Black Caps’ home games at the 2015 edition of Cricket World Cup.

The ACC delivers eccentric ball-by-ball commentary and offbeat analysis to New Zealand cricket fans all around the world, via a dedicated stream on www.iHeartRadio.co.nz and www.theaccnz.com.

Commentary team captain Jeremy Wells said the ACC contributors were “off their collective faces” with excitement as the World Cup loomed. “We’ve listened back to the old tapes from Kiwi commentary legends like Danny Morrison and Bryan Waddle and while we’ll never be as entertaining as them, we’re looking forward to imparting our thoughts on our audience of people who don’t take cricket overly seriously.”

Housed in a 1975 Sprite Alphine caravan and desperate for a deodorant or air freshener sponsor, the innuendo and wry observations of the seven-strong commentary team is proving unexpectedly popular across New Zealand.

“It’s quite surprising because we’re just seven guys who enjoy hanging out in a van talking rubbish, so it’s good to have more than just our mates listening,” Wells said. “We’ve had heaps of people tell us they are listening in their lounges, in their cars and at work – obviously with their headphones on. Families have told us they have never felt so close and yet said so little.

“The ACC is creating a beautiful thing.”

NZME. Radio managing director Dean Buchanan said that during the nine warm-up matches between New Zealand and Sri Lanka/Pakistan, The ACC had 280,296 streams, making it the most popular online cricket commentary for Kiwis.

“Between Radio Sport and The ACC there were a total of 548,854 streams. That’s an average of close to 61,000 streams per game tuning in via the internet which is just another sign that we’ve got some great options depending upon what listeners are after. Radio Sport is for the more serious sports fan while The ACC is attracting listeners who wouldn’t necessarily tune in and fans looking for a more obtuse, hard case approach to the game.”

The ACC is the brainchild of Wells, a Parnell social cricketer and one of the most hated people in Gore, along with Beige Brigade co-founder Mike Lane. Over the Cricket World Cup they will be joined by celebrity chef Leigh Hart, hairdresser Lee Baker, parenting columnist Matt Heath, part-time zombie Jason Hoyte, and fashion blogger Paul Ford.