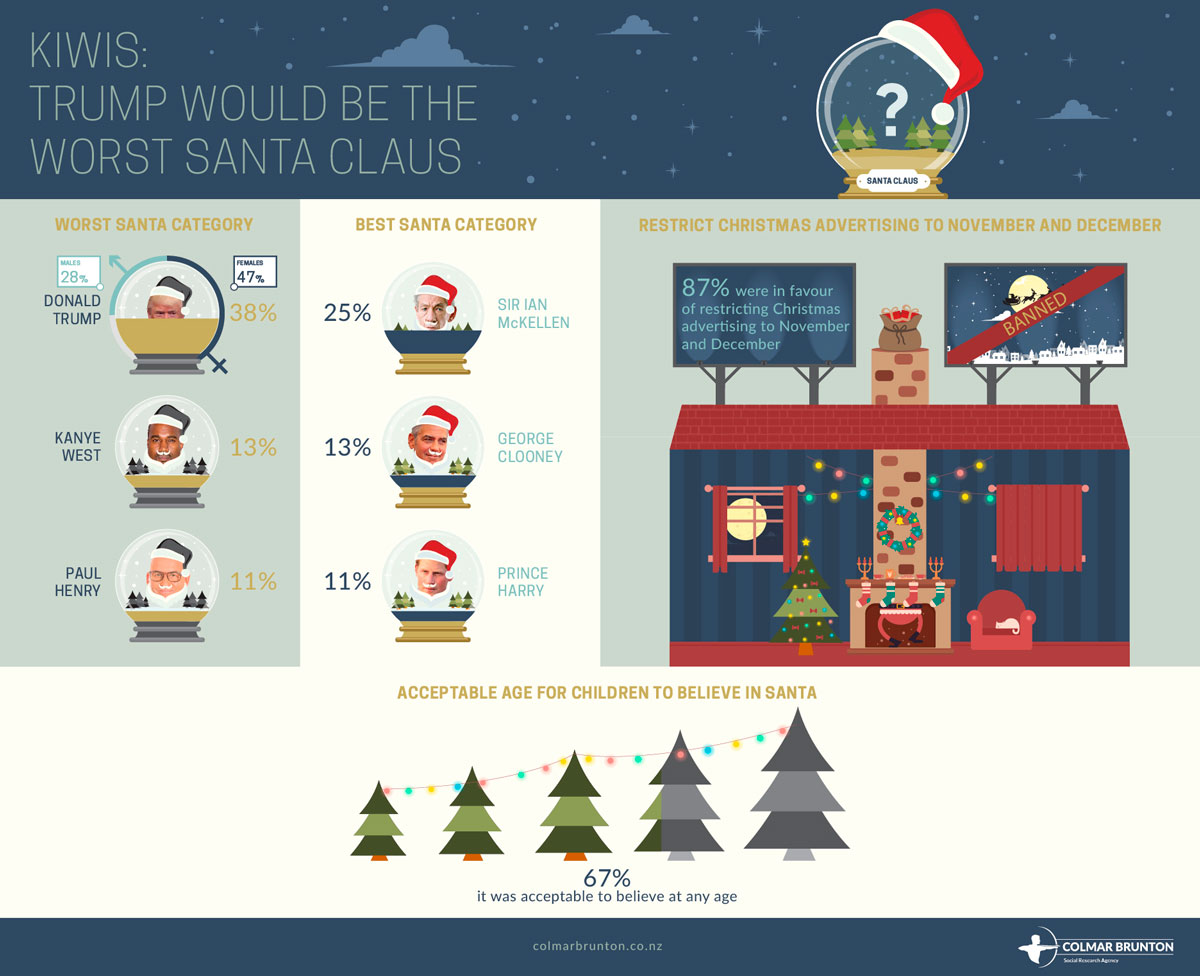 He may be Time magazine’s Person of the Year but Kiwis think Donald Trump would be the worst Santa Claus, according to Colmar Brunton’s 2016 Christmas survey.

US President-elect Trump was a clear choice in the worst Santa category on 38%, ahead of Kanye West (13%), who has threatened to run for the US presidency in 2020, and New Zealand’s own popular-but-polarising media personality, Paul Henry, is in third place on 11%.

Colmar Brunton account manager Jessica Balbas says women clearly were much less keen than men on the idea of The Donald as Santa, with 47% of female respondents nominating him as the worst Santa compared to 28% of males.

And the best Santa?
She says while those results may not surprise anybody, the choice for best Santa was a bit less predictable.

All Blacks record-breaking captain Richie McCaw, who has recently spent time helping out in the aftermath of the South Island earthquakes, could do no better than 4th place on 10%, with Prince Harry (11%) and George Clooney (13%) seen as more desirable in a Santa suit.

But the overall winner was Sir Ian McKellen with 25% of the vote.

“I guess when Kiwis think of Sir Ian they see him as Gandalf from the Lord of the Rings, complete with white hair and white beard, which makes him a natural fit,” Balbas said.

And when asked up to what age it is acceptable for children to believe in Santa, a solid two thirds of Kiwis said it was acceptable to believe at any age.

“I think kids these days have caught on to the ‘if you continue to believe you will continue to receive’ theory and are happy to play along well into their teens,” Balbas said.

Xmas ad restrictions?
The Christmas survey also saw Kiwis come out against the recent trend of Christmas advertising launching earlier and earlier in the year.

A whopping 87% were in favour of restricting Christmas advertising to November and December.

When it comes to stocking fillers, the advice, based on the survey results, is stock up on lollies, chocolate, gift cards, books and magazines but avoid the likes of socks, undies and fruit.

“Clearly Christmas is still seen as a time for treats rather than prioritising the healthier 5+ a day ethos,” Balbas says.

A representative sample of 500 New Zealanders were surveyed and the survey has a maximum margin of error of + or – 4.4%.

About Colmar Brunton
Colmar Brunton was started in 1981 by two Kiwis with a passion for taking research from the backroom into the boardroom. It is now New Zealand’s best known and most trusted market and social research company, with offices in Auckland and Wellington, and employing more than 100 research and business consultants. Colmar Brunton is part of the global Millward Brown network covering more than 51 countries around the world, and Kantar, WPP’s insight, information and consultancy group.