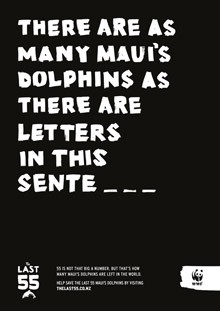 Ogilvy & Mather have again taken out the Newspaper Ad of the Month with their WWF Maui’s Dolphin ad.

The judges all agreed it was a “good idea that packed a punch, with art direction that won’t get lost”.

Special Mentions were also awarded to Big Communications for their Selwyn Foundation ad; and Ogilvy & Mather with two of their Environment Protection Authority ads.

The results mark the end of the Agency League hiatus period – which has been in play for the last three months in order to align Agency League annual season with the Ad of the Year awards period.

Winners receive $250, and Agency League points for their agency are tallied on a League table to run from July 2014 to June 2015.

Ogilvy & Mather were the winners of the inaugural Agency League season, which wound up in March this year, following a gruelling 12-month battle between creative agencies. 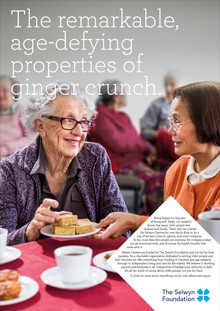 News Works’ Ad of the Month and Agency League competition is open to any ad that has appeared on a New Zealand newspaper website or app, or in any print edition.

Both digital and print entries vie together for the best monthly accolade, with only one individual ad to be selected top each month – although judges may give special mentions to a number of exceptional ads.

Every monthly winner from 1 July 2013 to 30 June 2014 will automatically be entered into the $10,000 Newspaper Ad of the Year, with the winner being announced at News Works’ annual awards on Thursday 2 October at the Sir Paul Reeves Building, AUT, Auckland.