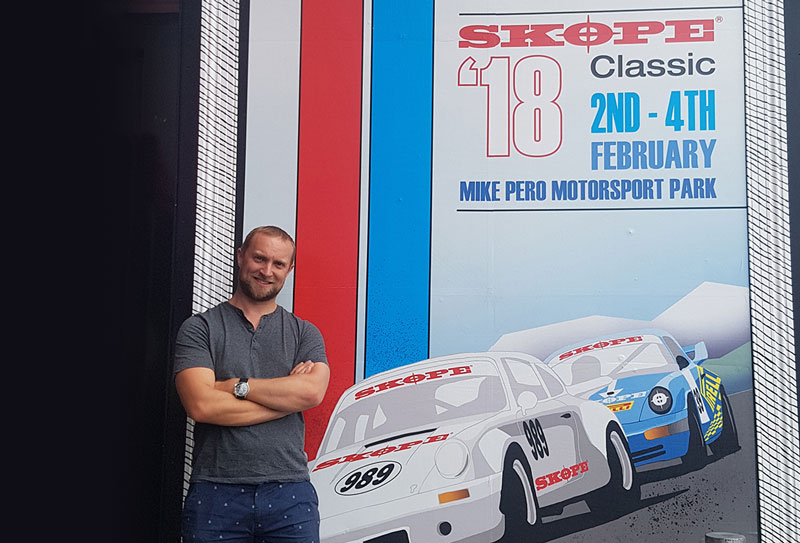 What you are about to read is pure advertorial – but it’s nicely written and entertaining advertorial, done in the unique Phantom Billstickers style …

Robin McDonnell has the serious-sounding title of managing partner but what he really prefers is Chief Billsticker. He started out pasting his own posters over Phantom’s efforts on the mean streets of Christchurch and eventually graduated to a role inside the Phantom organisation (which sounds like something from a superhero movie).

Read on to find out how he’s bringing digital tech to the street poster scene, why an apology may be better than asking permission, and how a 5am poster run led to him becoming world famous in Invercargill.

A lot of what I do centres on our bespoke operating system Paste and our real-time fulfilment and reporting suite Pasted. I’m currently working on a smart media booking system that will allow instant, intuitive booking of our entire 4000+ inventory by target demographic, customer segment and location.

What gives you a buzz at work?
I love the intersection of new technology delivering old technology that only Phantom can offer. It’s the best of both worlds.

We also have a great culture that brings out a lot of creative solutions to the challenges and ideas that come our way. It also occasionally ends up in some pretty out-of-control and ridiculous workplace conversations too.

Name a poster campaign that stands out in your memory.
One of our earlier campaigns that has stuck with me was Playstation 2. We launched a guerrilla attack on the streets of New Zealand with placards around statues, footpath stencils and street posters. We were still apologising months later for liberties taken, but the thing that stayed in my mind was the simple, strong imagery that’s still recognisable long after the gaming technology has become obsolete.

Closer to 2018, we’re far better behaved with leased, council-approved locations but I still really like simple, bold campaigns like the current Skope Classic 2018 posters that pop in our bespoke multi-coloured frames.

What’s the strangest situation you’ve faced?
You’ll encounter a lot of ‘strange’ on a paste run at 5am. I was once enlisted to plaster Southern Sting (Southland Netball) posters through central Christchurch the night before a big game. I was snapped by a photographer and ended up on the front page of the Southland Times.

Months later I was spotted sticking up posters in Southland and congratulated on doing my bit for the team. They even took my photo to prove they’d met me. That’s the power of the poster and my 15 minutes of fame in one.

How did you come to be at Phantom?
I’m originally from Addington in Christchurch, which is close to where Phantom’s roots lie. Because of that, street posters have always been part of my life. I have memories of admiring Phantom handiwork and later attempting to cover Phantom posters with my own.

In 1999 I met Jim Wilson when I got a summer job at Phantom and quickly realised this was what I wanted to do. I also started working with co-conspirator and Phantom’s other managing partner Jamey Holloway who, like me, had started as a billsticker a few months earlier. It was the start of a partnership that’s lasted almost two decades and gets stronger every day.

When the opportunity came up in 2004 to move to Auckland and establish a Phantom operation here, I sold everything and just went for it. Since then we’ve been building New Zealand’s best nationwide, street-level, urban media network.

What does that mean exactly?
We’ve created a whole new category of outdoor advertising that exists nowhere else in the world and is even starting to be copied.

Our hand-built frames and art installations bring a smile, our installation is perfectly flat, many of our sites are lit for 24-hour exposure, our pre and post-campaign reporting is industry-leading, and our team is committed to our customers’ success.

If you could put one client on posters, who would that be?
One industry I’m super-keen to promote is electric bicycles. Did you know there were 20,000 electric bikes imported into this country in 2017? That’s 20,000 vehicles off the road, and I’d love Phantom to be part of that movement.