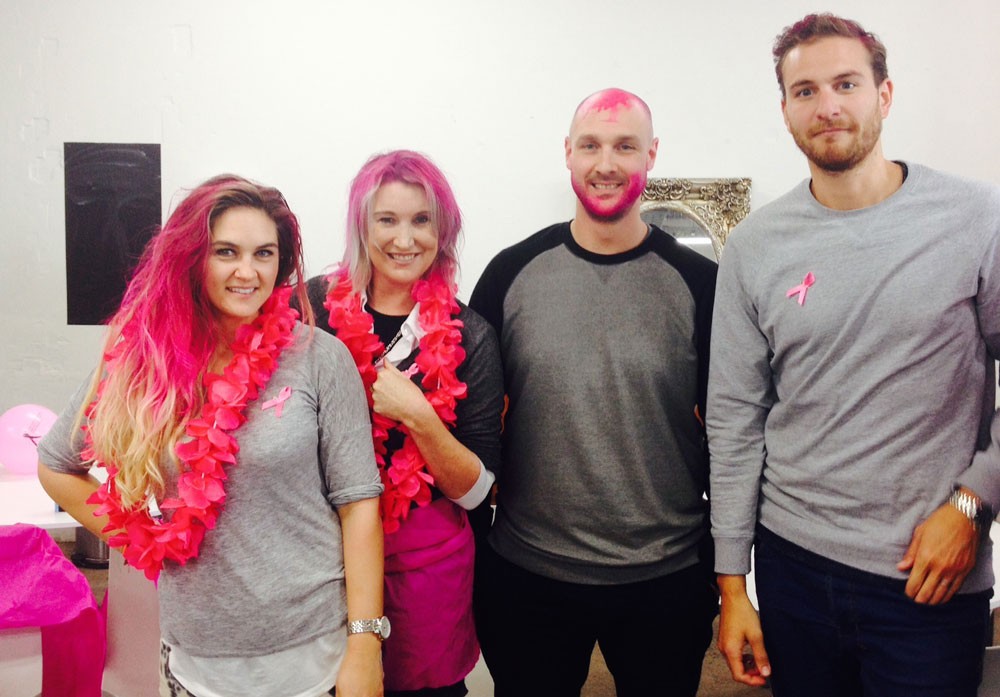 Tomorrow is the start of Breast Cancer Awareness Month and the NZ Breast Cancer Foundation has engaged Pead PR to challenge businesses (big & small) around New Zealand to get involved.

Pead & NZBCF created a dare, Real boss goes PINK – an opportunity for Kiwi bosses to take on a fun challenge from their staff as part of Breast Cancer Month during October. And for staff to find out how much pink the boss is made of.

“NZ Breast Cancer Foundation briefed us on this project,” Pead PR’s Leandri Smith told M+AD. “They would like businesses in NZ to raise money and generate awareness for a great cause. They have been quite successful in doing so in recent years with the Pink for a Day campaign where a business picked a day in October to dress pink, do a few activities and have a bit of fun in the office while raising funds.

“This year they wanted to add a fun twist so we suggested a social media challenge for bosses. Working in an organisation is about a group of people coming together to achieve common goals. It’s also about having a leader who walks the talk, leads by example and has a vision for the future….so what better person to really get his or her PINK on for breast cancer than the boss?

“bka Interactive is one of our clients and CEO Barb Anderson always walks the talk and … and she immediately volunteered to do the challenge.”

Here’s how Real boss goes PINK works: A champion within a business signs up for PFAD and with colleagues presents one of three challenges to the boss – with some surprise twists if possible. The team makes a pledge to raise a certain amount from the challenge.

The boss then has two days to accept or decline the challenge – declining is not recommended, the NZ Breast Cancer Foundation (NZBCF) says. If the boss accepts, that’s when the fun starts with the challenge being filmed and the video uploaded online.

NZBCF chief executive Evangelia Henderson says the aim is to inspire businesses and workplaces to have fun while fundraising for a highly relevant cause.

“Breast cancer is a significant issue for our women in the workplace and for our mothers, sisters, daughters and friends,” she says.

“Here’s a great opportunity to twist the boss’s arm and see how much pink he or she is really made of. Breast cancer is a serious challenge that seven additional women must face every day so we have developed three challenges that reflect that reality – in a fun way.”

Ideas – each of which must have a pink element – are ‘fear factor’, ‘the impossible’ and ‘silly fun’ and the boss can choose the challenge.

Fear factor ideas could include skydiving in pink, river rafting and swimming with sharks while ‘the impossible’ could include a baking challenge or giving up something for a month or defeating a colleague in a sporting match.

“Silly fun is just that,” says Henderson. “The boss could wear a pink tutu for the day, spray his or her pink and host a ‘pink is the new black’ fashion show with garments made from company stationery.”

The workplace champion has to ensure it is filmed and the video uploaded to either Facebook or Twitter with the tag @NZBCF using #BossGoesPINK.

“We’d love the boss to also contribute funds on behalf of the business and nominate another boss and tag him or her on the challenge video to keep the fun and awareness going,” Henderson says.

“Imagine the delight if the entire activity is posted on the business’ intranet or in social media – and there’s always the chance of being on the NZBCF Pink Wall of Fame if you’re a top fundraiser,” says Henderson.

“It’s a great way for businesses to ensure they stay in the pink. Oh, and by the way; if the boss chickens out on the challenge, a fine is payable and another senior staff member has to have a go!”

The New Zealand Breast Cancer Foundation is a not-for-profit, non-government funded organisation that depends on donations and fundraising for its work in breast cancer education and awareness, medical research and training grants, advocacy, and supporting women with breast cancer. The NZBCF’s programmes are evidence-based, overseen by its medical advisory committee. The pink ribbon symbol is a trademark of the NZBCF in New Zealand.