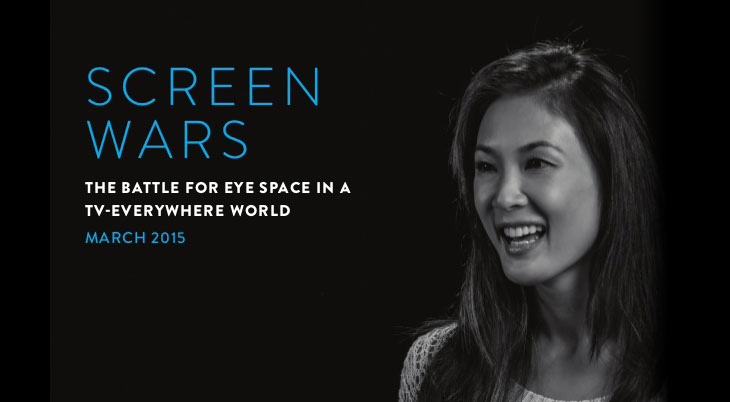 Three-quarters of New Zealanders (75%) believe face-to-face interactions are being replaced with electronic ones, according to a new report released by Nielsen. Screen wars: The Battle for Eye Space in a TV-Everywhere World examines the rapidly developing global digital video landscape and shows how consumers are adapting their viewing preferences to a new reality where seven-in-10 (70%) enjoy the freedom of being connected anywhere, anytime.

While the television is still the screen of choice for viewing video content, device proliferation and social-media interaction is shifting the power from the provider to the people.

“While the television set remains dominant, our viewing patterns are shifting and can now watch where we want, when we want” said Tony Boyte, research director, Nielsen NZ. “The explosion of devices has given us more access to content and brands than ever before. The media industry must adapt their strategies to fit with a new reality, offering engaging and relevant content that is easily accessible across devices and channels.”

The Nielsen Global Digital Landscape Survey polled 30,000 online respondents in 60 countries, including 500 New Zealanders, to understand how the changing digital landscape is affecting how, where and why we watch video programming. Video programming was defined as any type of content, such as TV, professional video or user-generated content that is watched on a TV, PC, mobile device such as a phone, tablet or e-reader. The study also examines consumption preferences for video programming, including the devices most commonly used for selected genres and the devices used to view video at home and on the go.

How we watch: screen size matters

Why we watch live: push has now become the pull

Boyte discusses how producers of content can successfully engage audiences online: “Social media can increase programme awareness, make the experience more enjoyable and keep viewers engaged. Second-screen strategies should include an interactive component that allows users to take part – making them feel involved and deepening their connection to the programme. But the content needs to be fresh to maximise time spent and to drive repeat visitation. Designers can’t focus on one screen, they need to ensure accessibility wherever users are and that the user experience is enjoyable across all devices.”

What we watch: devices proliferate but the television dominates

Whether it’s watching a sporting event, news show, documentary or movie, TV remains at the centre of video consumption. It is the most frequently cited device for watching nearly all types of programming genres included in the survey—by a wide margin. The exception: short-form video (typically less than 10 minutes long), which is cited as more commonly viewed on computers, mobile phones and tablets. A computer is the second-most commonly mentioned viewing device for nearly all genres, and it tops the list of devices used to watch short-form content. A smaller, but notable, proportion of consumers watch video content on a mobile phone or tablet, while viewing on e-readers and/or gaming consoles has not yet gained traction.

About the Nielsen global digital survey

The findings in this survey are based on respondents with online access in 60 countries. While an online survey methodology allows for tremendous scale and global reach, it provides a perspective only on the habits of existing Internet users, not total populations. In developing markets where online penetration is still growing, audiences may be younger and more affluent than the general population of that country. In addition, survey responses are based on claimed behaviour rather than actual metered data.