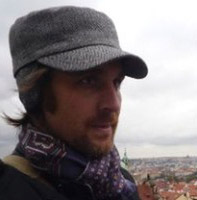 Kiwi director Nathan Price has just shot a TVC for Samsung’s new curved UHD TV – the second time the manufacturer chose NZ and a NZ director for a global shoot (see preceding story). Samsung NZ took the opportunity to do an in-depth interview:

What did you know about Samsung and or their TV range before you became involved in the campaign?
Of course a very famous brand, I’ve been eyeing up switching to one of their phones.

How did the brief to you come about? How involved were you in translating that brief into execution?
The script was developed by CHI and partners in London. The basic story is laid out but my job is to bring the text on the page to life. I think what drew the agency to my style and approach, is that I like to do as much as I can in camera. We built a giant set coliseum from scratch which was quite an undertaking.

Why New Zealand as a location for the second year in a row for Samsung?
Actually the agency thought they would be shooting an existing coliseum in Spain or Tunisia but we needed a contemporary coliseum not a ruin. So for us it was about getting the right crew and craftspeople together in a solid production centre. Obviously New Zealand has a fairly fearsome reputation for this kind of work with Peter Jackson’s features and TV series such as Spartacus, Hercules etc so they didn’t take too much convincing.

What challenges did you face trying to express / incorporate the curved screen and the resulting immersive effect into the TVC?
This TV is designed to immerse you in Hollywood’s most epic productions. Ridley Scott took six months just to build his coliseum for Gladiator. We had to create something completely original and new but of similar scale in less than four weeks. Luckily here in NZ we’ve got amazing crews and craftspeople with a never say die, can do attitude but as with any large scale production there were a lot of stressful meetings, and everybody – set builders, wardrobe, locations, hair and makeup, production, weapons makers you name it – they all worked their butts off.

What difference from your perspective, does it make filming and showing a production in UHD?
It’s certainly is a lot more work, as you need to create so much more detail at every level. Things you could get away with before need that extra refinement, both in the production design and in the shooting, but when you’re watching it’s pretty spectacular, you feel like you’re right there. It’s one of those things where you don’t really know what you were missing, but then when you see it you don’t want to go back.

Why in your view, is clarity of image and curvature of the screen so important in delivering something to entertain and engage viewers?
I think there is something very cinematic about the curve, something that we automatically associate with going to the cinema, so in this way I think this technology will bring a special factor to the home television experience.

Where was the TVC actually shot and how long did the set build take?
We found a location in a functioning quarry in Wiri, Auckland and the whole set was constructed in 14 days. Of course designing and dressing it were additional to that.

Extras numbering in the hundreds must have been a challenging task – to coordinate and inspire. What’s involved in getting so many people together on the same day, and all in togas?
A lot of phone-calls and expert production co-ordination to make sure they all turn up on the day. The location was tough on everyone.  There was a lot of wind and dust so we had to shut down filming a couple of times. But cast and crew were unflappable. When the cameras rolled, the massive crowd started chanting and it felt like you really there.

How long did the CGI component take to complete?
Six weeks. The big shot was the opening wide shot, and then we added some extra people, detail and height to the set.

How do you feel as a Kiwi (of some renown) being briefed to produce a global campaign for a global brand?
I wouldn’t say I’m at all known but that’s kind of what we do now, we did a number of global campaigns last year. But this was definitely a prize / high profile project. We shoot all over the world but when we’ve got something really challenging and the stars align, I love bringing these big projects back to NZ, pulling together our trusty A team and showing the world how it’s done.

What do you think you bring to the table that perhaps differs from someone from somewhere else?
In this case I feel that my long working relationship with the local crew in Auckland really helped. When you work with the same crew a lot you develop a sort of short hand and many of the crew members work on most of our productions.

Anything else exciting on the horizon?
Always, but as usual I’m not allowed to talk about it!