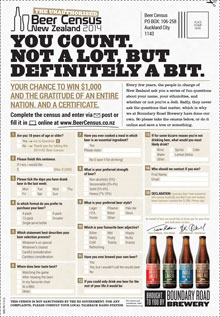 “This ad demonstrates good use of the medium with a topical link to the current political activity,” the judges said. “The agency managed to turn something ‘dry’ – such as a survey – into a humorous way to advertise beer, with good little snippets throughout the ad from the headline to the declaration.”

With this month’s win, Barnes Catmur sits alongside last month’s winner DDB at the top of the table.

Ad of the Month winners receive $250 and Agency League points for their agency, which are tallied on a league table to run from July 2014 to June 2015.

To enter digital or print ads in Ad of the Month and gain points on the Agency League table, go to www.newsworksnz.co.nz/creative/ad-of-the-month/enter.

Every monthly winner from 1 July 2013 to 30 June 2014 will automatically be entered into the $10,000 Newspaper Ad of the Year, with the winner being announced at News Works’ annual awards on Thursday 2 October at Sir Paul Reeves Building, AUT, Auckland. To register for your free ticket at this year’s awards, go to www.newspaperawards.co.nz.