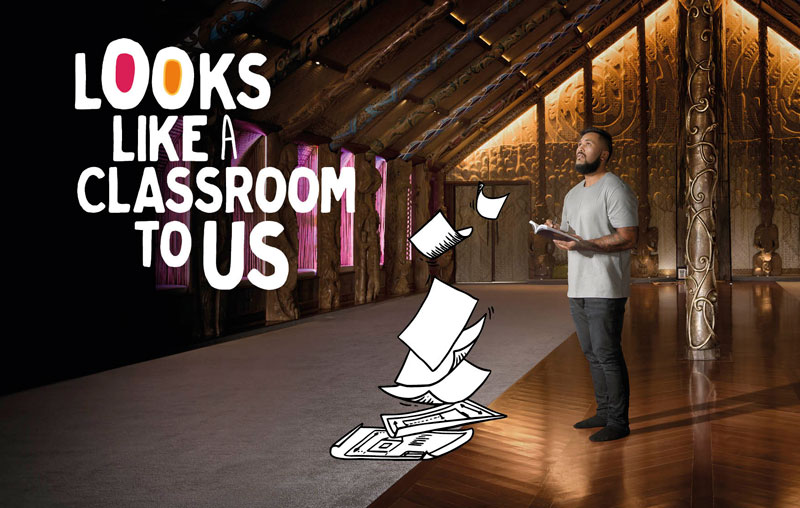 Friday night at the movies was transformed into something extraordinary by Republik Communciations last week, as they partnered with Auckland-based tertiary education provider Unitec to create what looks to be a world-first in new technology.

As an extension of the Looks Like A Classroom To Us 2017 enrolment campaign launched in October, Republik created the first live, interactive 360 degree video cinema experience for Unitec in New Zealand – and quite possibly the world.

The impressive whare whakairo is an inspirational environment to many Unitec students, including those studying architecture, who are able to see first-hand the blending of traditional Maori design and traditions, with modern, innovative architectural techniques and considerations.

Renata says the unique demonstration utilising the interactive video technology enabled him to engage and inspire a huge audience by allowing them to be fully immersed in the marae environment on the massive cinema screen. At the same time he could deliver a live, minute-long lecture that explained some of the compelling architectural elements of the marae’s construction.

Following on from the VR learning experiment in Britomart last year which featured Neurosky brain scanning, this new innovative technology experience featured the first of a series of 360 videos planned by Unitec and Republik as part of the 2017 campaign.

Building on the new ‘Think. Do’ brand positioning launched in 2015, Unitec’s general manager of Marketing Alistair Kirk said the 2017 campaign’s goal is to challenge perceptions of the classroom and showcase what a world-class learning and teaching environment should be.

Taking a challenger stance was a key focus of the Semester 1 2017 brief. While Republik has already launched the 360 video in other NZ-first environments including Tube Mogul, creating an unexpected, engaging experience in the real world was the ultimate goal.

“We’ve used VR headsets to deliver innovative new Unitec experiences to people in the las year, but the one thing they still lack is the social aspect,” Republik director Heath Boot said

No goggles!
“We wanted people to be able to enjoy more of a connected experience with the people around them, instead of being restricted by VR goggles and wires. That meant we had to take the technology to people in a completely new way. The sheer scale and immersive environment of cinema represented the perfect opportunity to do that.”

Working with Val Morgan, Hoyts and experiential agency Spur, Boot acknowledged that it took a lot of trial and error to find a solution that delivered the best experience.

“We had to battle with all manner of technology challenges while also coordinating with Hoyts on times to get into the cinema to test each potential solution. It was right down to the wire but our partners all did a fantastic job and we are thrilled with how it turned out.”

While the event was planned as a surprise one-off, the 360 video can be seen on Unitec’s website and social pages.