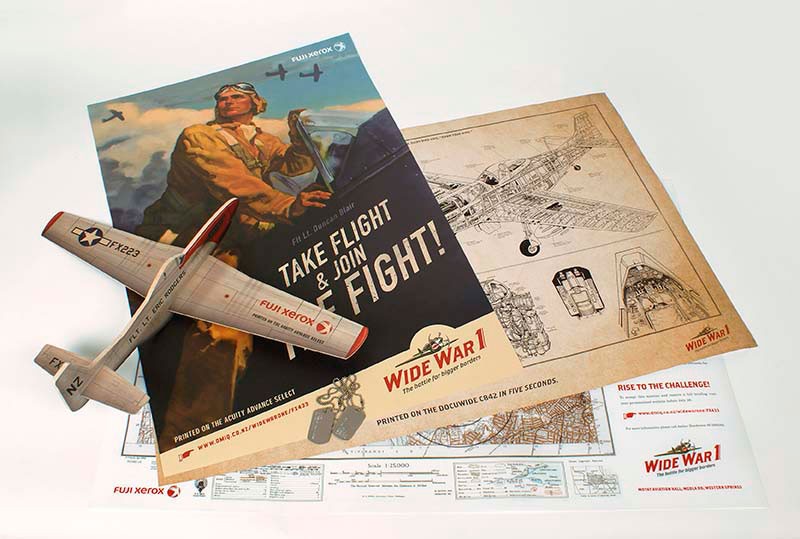 The campaign won gold as one of the top Business-to-Business campaigns globally, and the prestigious Diamond ECHO as the Best in Show. It has recently won two golds and best Art Direction at the NZDMA awards and a further two trophies at the AMES Awards in Singapore.

Republik Director Paul McNamara describes it as a fantastic result. “To be up here with the best in the world and be awarded gold is hugely rewarding, but to get Best in Show is mind-blowing,” he says.

McNamara credited the Fuji Xerox clients for their role in the result: “Steven Caunce, Amber Henderson and Alistair Egan from Fuji Xerox are a great team and are fantastic to work with. They allow us to push the boundaries and that has delivered results. The campaign has completely exceeded Fuji Xerox’s sales targets and delivered an incredible ROI, making it one of the most effective campaigns of the year. Ultimately, that’s what it’s all about.”

It was also one of three campaigns showcased at the DMA 2014 Fast Forward Session on October 27. Republik’s Paul McNamara and Fuji Xerox’s corporate affairs manager Steven Caunce presented the case study then underwent a Q&A session with an industry panel, with an audience of 300.

Karen Rice Gardiner of the DMA International ECHO Awards Board of Governors said: “Your campaign captivated the ECHO judges. Your ingenuity, your marketing acumen and your flawless execution of the concept won our admiration.”

Fuji Xerox’s Caunce added: “It’s absolutely delivered in every respect. With the bar now set this high, what are we going to do next?”

Wide War One was a fully personalised, dimensional DM piece, promoting specialist high-end, wide format digital printing and finishing equipment. Recipients responded via an online portal where they could personalise their own model WWII fighter planes, which were then downloaded and printed digitally onto balsa wood. The planes were then collected at the launch event and flown to compete for prizes.