She writes in the New Zealand Herald that, like many others, she was shocked to see the Glassons ad featuring a glamorous young woman astride a bull desperate to rid itself of both rider and the cruel bucking strap around its abdomen.

“It seems that Glassons needs a new marketing team if they think that girls with protruding ribs followed by televised animal cruelty is the way to reach the NZ market — unless it’s a case of any publicity is good publicity?” 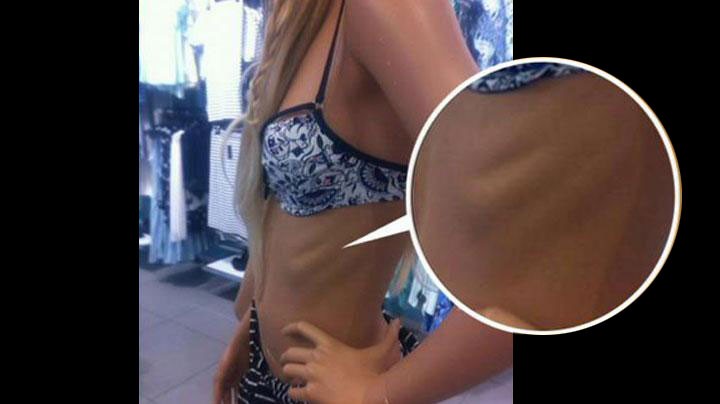 “I think this is simply a case of stupidity and ignorance from what would essentially have been a group of advertising executives sadly lacking in common sense or an appreciation of public opinion.

“Of course there are many supporters of rodeos in NZ, but do they shop at Glassons?”

Hibbard continues: The NZ Rodeo Cowboys Association describes itself as representing one of New Zealand’s most thrilling and exciting sports. It runs events up and down the country claiming attendance in excess of 5000 people, attracted by the ‘family atmosphere’. The website features pictures of stressed and frightened animals being ridden or chased around an arena by men in their best cowboy gear. All in the name of entertainment and eerily reminiscent of the sort of crowd pleasing that may have been enjoyed in the times of the Roman Empire.

“The way rodeos work is to incite an animal’s natural response of fear of anxiety to a very stressful situation and then further terrify it by attempting to throw it around, stay on its back, tie it up, sit on it or use devices to cause the animal more discomfit and elicit an even more dramatic reaction from the victim.”

Bull Riding
A bull is released (sometimes after being goaded by an electric prod) complete with its rider into the arena. The bull is fitted with a bucking strap cinched tightly around its abdomen which causes the animal to buck constantly to free itself of the torment, which of course it cannot. The rider must hold on with one hand only and gets extra points for ‘spurring’ the bull.

Saddle Bronc
This event originating from the actual breaking in of wild horses, however the horses used in rodeos are not wild so are also treated to the extreme discomfort of bucking straps without which there would simply be a person riding a horse.

Steer Wrestling
As the name suggests this event is all about ‘wrestling’ the unfortunate animal to the ground in the fastest possible time. A person’s full weight is thrown on the frightened animal to achieve this goal.

Team Roping
A steer is pursued around the arena by two people on horseback. A rope is thrown around the running animal’s neck and then the legs tied tight.

Barrel Racing
A female only event, this is essentially a time trial to make several very sharp turns around barrels at high speed on horseback. The high probability of the horse falling at the turns adds to the ‘excitement’.

“It is hardly necessary to spell out the likelihood of injuries to the animals during these events,” says Hibbard. “Not to mention the hardship and suffering during transport and holding. These animals do not enjoy being thrown around, tied up and made to wear painful bucking straps. Would you do any of these things to your dog and not expect a charge of animal cruelty? It is no wonder rodeos are opposed by animal welfare groups both in NZ and overseas.

“One of the headlines about the Glassons controversy reads Rodeo Ad Outrages Animal Activists. Do you really need to classify yourself as an ‘activist’ to condemn this sort of behavior? Tormenting animals for the sake of entertainment is an outdated concept that puts rodeos in the same category as dog fighting or bear baiting.

“Auckland Council has had the good sense to ban rodeos. Let’s hope that ultimately the rest of the country takes a look at rodeos from the animal’s point of view and does the same.”

Watch the Glassons ad below.