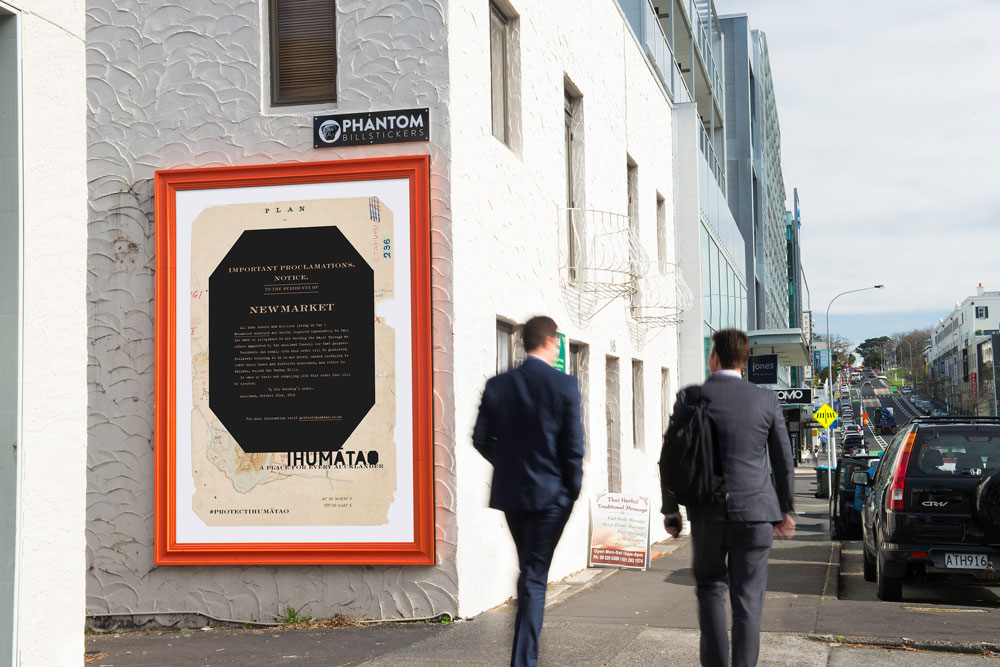 Sugar & Partners and Phantom Billstickers have launched an integrated digital, outdoor and print campaign to force Auckland Council to halt development on a contentious piece of Auckland land that is a historic and sacred site to Maori.

Driven by provocative street posters that mimic proclamations ordering Maori off land in the 1860s, concerned Aucklanders arrive at a unique website – that explains the inflammatory message.

They are then invited to occupy the land ‘virtually’ and join the thousands of other occupiers who have taken a similar journey.

Joint ECD Damon O’Leary was incensed at the story SOUL’s Pania Newton (scroll down for the link) came to the agency with. “Pania’s ancestors had their land seized from them in 1863 after a proclamation went out demanding they pledge allegiance to the crown.

“They had been there for 28 generations,” O’Leary said.

“Suddenly George Grey’s handing over this amazing spot to farm cows. Pania wants all New Zealanders to continue to have access to this historic site but the council has empowered a developer to chuck 400 or so houses on it that will destroy much of the site and ensure only a few very rich people will enjoy the sea views and special atmosphere.”

Phantom also came to the party
“It was a no-brainer – and we immediately agreed to do the campaign for free,” Phantom Ben Stonyer told M+AD: “S&P asked us to come in and we loved the ideas so we put up 25 high-profile Max A0 posters on some of our best sites around Auckland – we were angry as hell about what the council’s allowing.”

A print campaign is also planned to help drive more and more ‘occupiers’ to the website, share the story to Facebook and twitter while also being encouraged to send Phil Goff and Nick Smith a protest email – once again at the press of a button.

Dave Nash said: “It’s digital activism at its best – you can protest through virtual occupation, spread the message on social, and plague the powers that be – all from one site. We ‘re hoping it adds up to the developers backing off and the Council ensuring this land continues to allow public access for future generations of all Aucklanders.

“After only a few days – nearly 1700 protesters have already invaded the land virtually. Why not join them?”