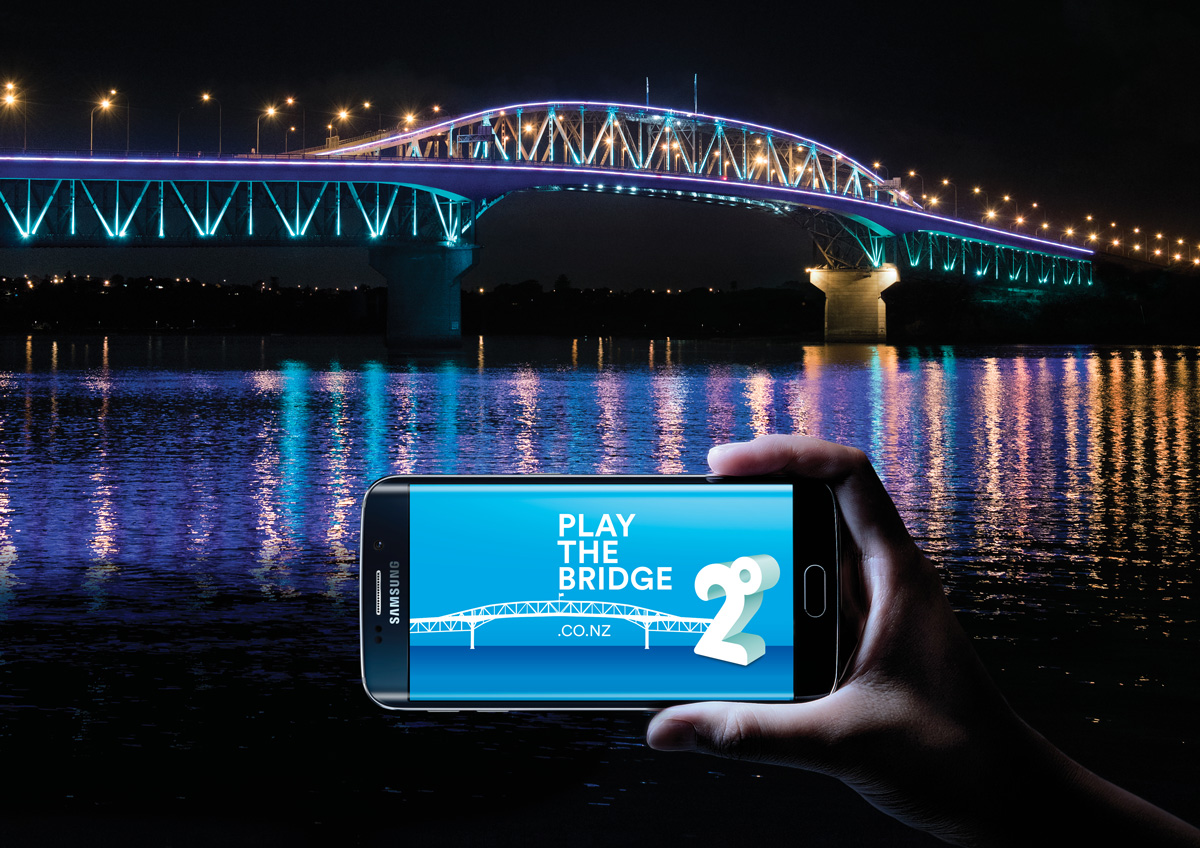 To celebrate the launch of its new plans and the upcoming Samsung Galaxy S6, 2degrees is transforming one of Auckland’s most iconic landmarks into a giant interactive lightshow, moving to music tracks chosen by the public.

For the first time in its 56-year history the Auckland Harbour Bridge is to be lit up by over two kilometres of LED lights which are all hooked up to the power of Google Play Music. Aucklanders can go directly to www.playthebridge.co.nz and choose from over 30 million songs.

The dynamic light show is synched to the music, bringing the tracks to life in a spectacular way. The performances can be watched via live stream on any mobile or device, or people can watch the lights in person at several great vantage spots around the harbour (with the music coming through their own mobile device).

“This is a brilliant example of just what you can do with mobiles now,” said 2degrees head of marketing communications Trent Harnett. “Kiwis from anywhere in the country, and the world for that matter, can play the Bridge and see it come to life on their mobile or device.”

Lighting up the country’s biggest bridge and syncing the light show to music has been an incredible technical feat, says Special Group managing partner Michael Redwood. The light equipment, over 1000 LED light tubes with almost 50,000 light bulbs, were shipped from Sydney. For a week, bridge lanes were officially closed in the early hours of the morning to allow Sydney-based lighting company 32 Hundred Lighting, to climb the bridge and install the lights by hand.

Special Group has worked very closely with the NZ Transport Agency, ATEED, Google, Samsung and music labels Sony, Warner and Universal to make this happen. The project has the full support of the NZTA and ATEED as it’s part of the extended programme of celebration of Auckland’s 175th anniversary.

“From the various council and transport agencies to the team who carried the 1000 LED lights up the Bridge, it’s been a real team effort,” Redwood said.

“Our current campaign for 2degrees introduces leading new phone plans that reflect the different ways we are using our mobiles these days. That’s why the plans have the best data offering in the market. Play the Bridge just takes this to a whole new level.”

“This has been a huge challenge for our digital team and production partner Gladeye. But exactly the type of collaboration we enjoy” says Special Group Creative Partner Rob Jack.

The 2degrees Play the Bridge will light up Auckland City Harbour every Friday, Saturday and Sunday night from 8pm until 11:30pm for a seven week period from today (Thursday 12 March) until Saturday 25 April.

How to play The Bridge:

2degrees Play the Bridge in numbers: