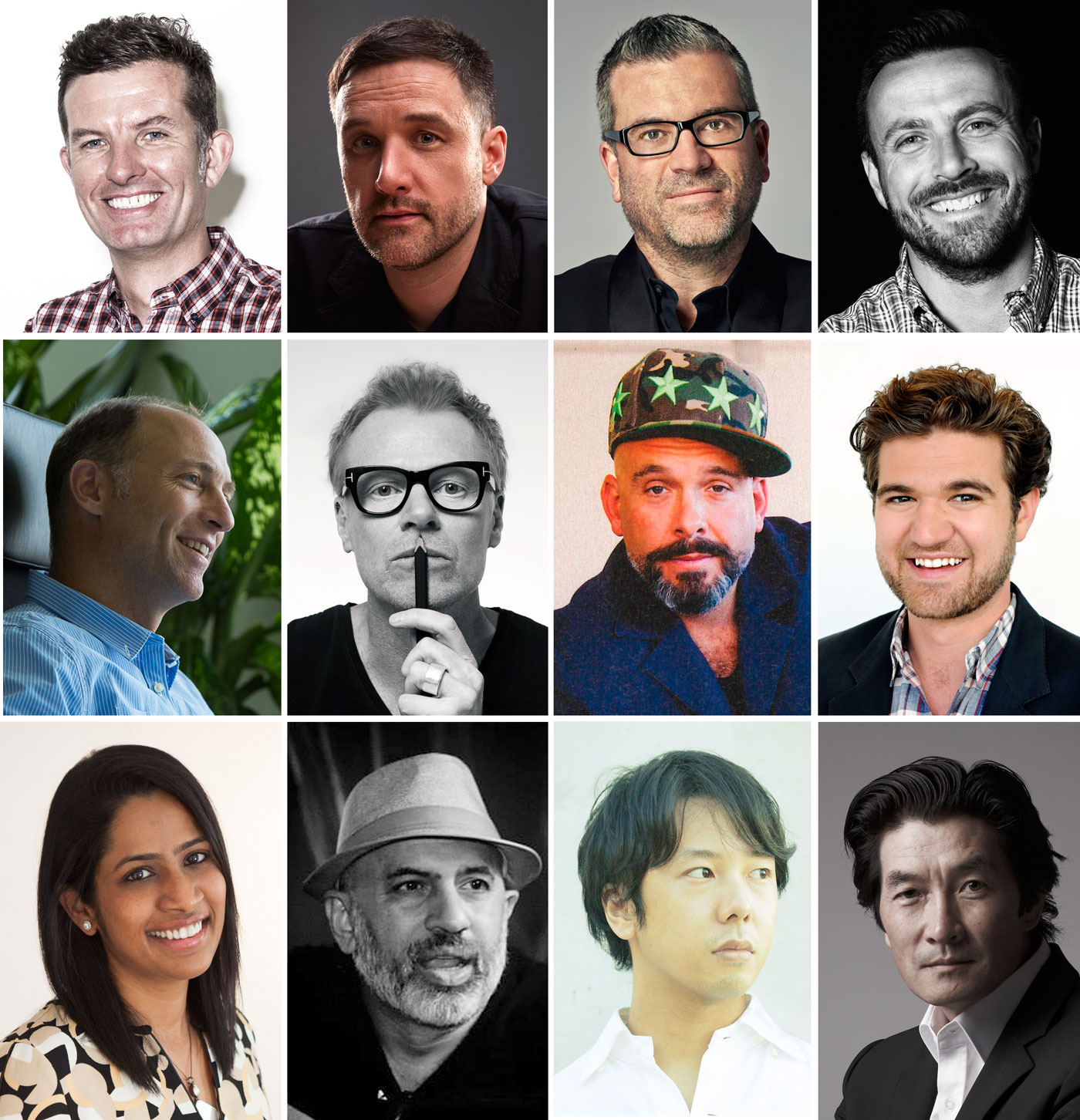 Spikes Asia 2015 has announced its call for entries, and unveiled the 12 senior ad people who will preside over the juries. Colenso BBDO ceo Nick Garrett has been appointed as president of the Creative Effectiveness jury president, while Curious Film’s Peter Grasse, who has strong links to NZ and is well known throughout the region, will wrangle the Film Craft jury.

Terry Savage, Chairman, Lions Festivals, said that the quality of the jury presidents was reflective of the region’s standing on the world stage.

“Each president brings a depth of experience in their respective field and will capably lead discussions around the industry and region to ultimately award truly outstanding creativity.”

Working with leading brands including Coca-Cola, General Motors, Diageo and Chipotle, Hunter was hailed the third Most Awarded Creative Director by Advertising Age and was featured on The Holmes Report’s “The Innovator 25”.

“It is an honour to serve as president of the Branded Content & Entertainment category this year,” he said. “This region has produced some of the most iconic and exciting branded content in the industry, and I hope to see that taken to a whole new level. We will be on the lookout for eloquent and emotional storytelling that adds value to people’s lives and effectively builds a brand. We will be looking for work that puts a dent in the world.”

Since joining Colenso BBDO in 2010, Garrett has driven the agency to become noted for outstanding creativity and effectiveness, ranking as the most effective agency in the world by WARC in 2014.

“It’s an honour to be asked to chair the Spikes Asia Creative Effectiveness Jury,” he said. “As Asia’s creative reputation grows rapidly at a global level it is more important than ever to demonstrate how brilliant creative thinking can be a powerful weapon to solve business problems and to show the best work our region has to offer is highly effective.”

Yagai’s work has been influential in pushing the boundaries of creativity and has seen him earn the title of the most awarded art-based creative in Japan with an accolade count that reaches over 150.

“Design created for design’s sake is not design,” he says. “Sometimes, however, award shows tend to recognise designs that are not derived from the brand philosophy and somewhat leave the brand behind. Design should be at the centre of the brand strategy, and bring the brand philosophy to life. If the goal is achieved without putting any stress on the brand, then the output is most likely to be beautiful. I hope we can carefully search for and discover such work.”

Choi has worked on some of the world’s leading brands such as Nike, Coca-Cola, Toyota F1 and Samsung. Currently leading the Seoul Headquarters of one of the largest advertising agencies in the world, his work has been recognised at both national and international levels.

“I’m looking forward to Spikes and seeing the best work from Asia. We now stack up against the best agencies in our world. Asia is no longer an afterthought when it comes to great work.”

His expertise in introducing international brands into the Chinese and Asian markets have seen him earn the titles of ‘Fourth Most Awarded Creative Director in the World’ and Campaign Asia Pacific’s ‘China Creative of the Year’ in 2014.

“I am looking for those rare, fresh ideas that force their way through to the top. Pieces that cut through the chatter, connect and truly have an effect,” Andersson says.

For over 10 years Grasse has been instrumental in Curious Film’s development as a dynamic Asia-Pacific production company, winning multiple awards including Cannes Lions Film Craft Lions and a top three ranking in BestAds ‘Production Companies of the Decade’.

“As a long-time champion of crafted excellence in film, I’m energised to honour those clients, agencies & production companies that value the power of inspired production.”

Focusing on digital led marketing in the Health and Wellness industry, Thapar has won numerous awards for his work, which strives to breach the boundaries of health, creativity, technology, people, culture and science.

“I’m really excited because I’ve been a fan of work from Asia for a long time. I’m very curious to see how the larger global economic pivot towards east is showing up in the work. And because health needs more creative thinkers globally to take up the challenge, I’m keen to see how agencies in Asia are delivering health & wellness ideas that are differentiating, relevant, innovative and engaging. I’m looking forward to passionate discussions with jury members, and learning from them.”

Cooper’s use of digital technology has proven successful in developing inspirational campaigns that have led to numerous accolades for M&C Saatchi, including ranking as Australia’s 2nd Most Innovative Company in Business Review Weekly and receiving B&T’s 2014 Agency of the Year.

“As we move into a post-industrial era the opportunity abounds for Asia Pacific to increase its position as a thought leader,” he says. “I look forward to exploring the diversity of ideas from the region, the breakthroughs and the solutions to problems previously thought insurmountable.”

Waters has developed the Dentsu Aegis Network by broadening their product offerings across the Asia Pacific region, leading to numerous accolades including Dentsu winning Agency of the Year at both Spikes Asia and AdFest and Isobar winning Campaign’s Digital Network of the Year.

“We all know Asia is the world’s most dynamic and exciting region, but is this vibrancy matched by the quality of thinking, innovation and execution? Have agencies helped brands harness the growing consumer spending power through all the channels available? Is the mass usage of social media and mobile being utilised effectively to drive sales? Are we connecting the point of brand exposure to transaction? Is the offline to online universe being effectively connected? These are the kind of questions I am looking forward to seeing answered at this year’s Spikes – in short, how well are agencies doing in helping brands to keep up with their consumers.”

Building her earlier agency into one of the largest public relations consultancies in India, including consulting for Fortune 500 companies across numerous industries, Pinto leads the Indian arm of Weber Shandwick and sits on its Asia Pacific senior management board.

“I look forward to experiencing the best of the creative best from Asia Pacific at the Spikes Asia Festival of Creativity this September,” she says. “It is my privilege to serve as president in the PR category where one can experience the greatest work from across the region with high impact campaigns that impact lives. It would be interesting to review the diversity of the work and take back learnings to India.”

Marcus has been the driving force behind Y&R Asia becoming one of the region’s most awarded networks over the past few years, having won hundreds of awards across national and international festivals.

Described by Campaign magazine as a “unicorn” in the communications industry, Eastwood has overseen some of the most innovative and recognisable creative projects in advertising today. He is a highly awarded creative and in AdAge’s 2013 Award’s Report was listed as the 5th most awarded chief creative officer worldwide.

“Asia is one of the most exciting creative regions in the world,” Eastwood says. “The work is always beautifully crafted, from design to art direction to copywriting. And we often see incredible examples of innovative and ground-breaking uses for new technology. I’m really looking forward to seeing some amazing work.”

For the first time, Spikes Asia will award the Grand Prix for Good. This new trophy rewards work ineligible to win a Grand Prix in their sections because they are made for charities/not for profit or have charitable or public service messages. All such excluded gold winning entries will now be considered by the Integrated jury who will decide on the winner.

Elsewhere, the Creative Effectiveness category’s eligibility dates have been extended, broadening its scope to include previously shortlisted or awarded campaigns from the past three years.

Everything you need to know here

Entries to Spikes Asia are now open. Further information on how to enter the awards, including category definitions and rules, fees and important dates can be found at www.spikes.asia.