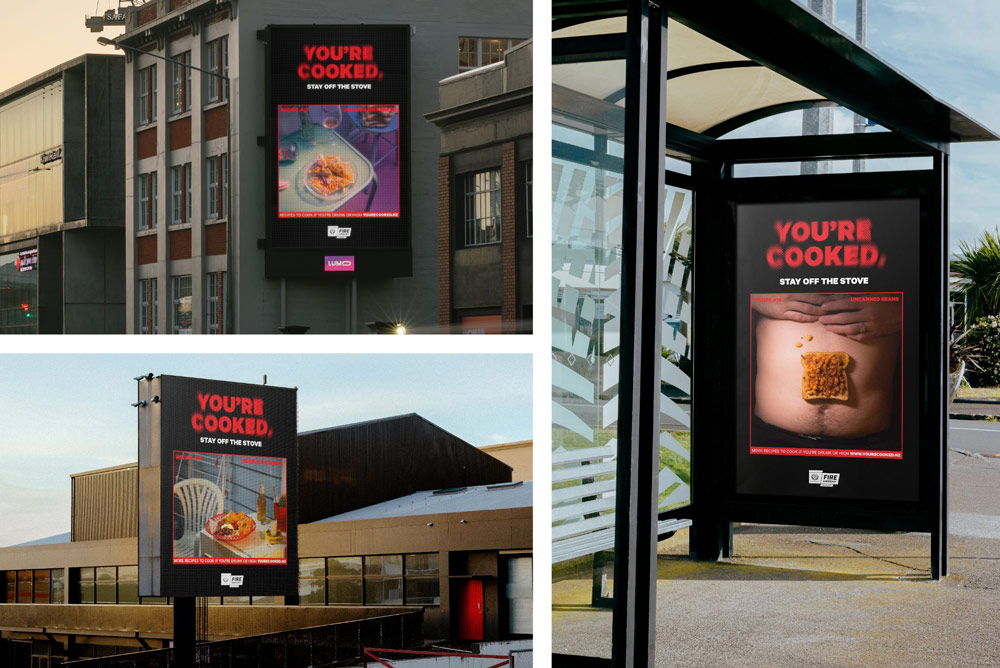 With one in four house fires starting in the kitchen, and 50% of all fatal house fires involving alcohol or drugs, the reality is that cooking under the influence is often a recipe for disaster in Aotearoa.

FENZ deputy ceo Steph Rotarangi said: “It’s easy to get distracted if you’re drunk or high, and that’s why cooking on the stove so often leads to disaster.

“This is not the first time we have tackled this issue through our social marketing, but our old ‘Don’t drink and fry’ platform needed an original modern take to fit today’s audience.”

“Developed in collaboration with Chef Jamie Johnston of Everybody Eats, the recipes come from the world of our under-the-influence chefs. Toast Sandwich, Jacked Fairybread, Not-Fried Rice and Kiwi Onion Carbonara are but some of the many fire-free offerings that illustrate the plethora of ways to safely satisfy the late night cravings (without burning the house down).”

Motion Sickness head of strategy Hilary Ngan Kee said: “In a perfect world, people wouldn’t get drunk or high, but that’s simply not the world we’re living in.

“You’re Cooked was wholly designed to function in the real world. That’s a world where people do things they’re not meant to do, they live in the here and now, and when they’re hungry, they’re going to want to eat.

“This is a campaign made to grab attention and engage, but to also show people that the safer option is a good option, in every sense.”

“We knew a bit of smoke and mirrors wasn’t going to cut the mustard when speaking to our under-the-influence audience – the campaign had to live and breathe in their world.”

Motion Sickness CD Jordan Stent said: “From the inception of the platform, we knew a little bit of smoke and mirrors wasn’t going to cut the mustard when speaking to our under-the-influence audience – the campaign had to live and breathe in their world.” says Jordan Stent Creative Director Motion Sickness.

“It’s a concoction of lived experiences and crowd-sourced confessions, inspired by all of the resourceful methods and inclinations that exist in the inebriated reality of our audience.

“As a result, the creative has landed in a rather unique territory. A blurry mix of fact and fiction, in which the traditional PSA campaign has been almost co-opted by the same individuals we were inspired by.”

Stage 2
“The second stage of the campaign then took the suite of curated recipes into the field to be tested by real, cooked people on the set of a custom You’re Cooked Test Kitchen.

“Unveiled in Britomart Square, during a churning Friday night, the amateur chefs donned both toque and apron before becoming the hosts of their own booze-soaked cooking show.

“Forgoing the allure of the golden arches or tinfoil-clad kebab, the chef’s fire-free victory lap of the kitchen and journey from cooked to contented is captured in a series of lively videos, each showcasing the method behind one of the book’s many recipes.”

You’re Cooked is live until 7 January across social, online video, programmatic display, out of home, digital audio and influencer activity.

The campaign is rolling out across digital, social, and outdoor platforms.