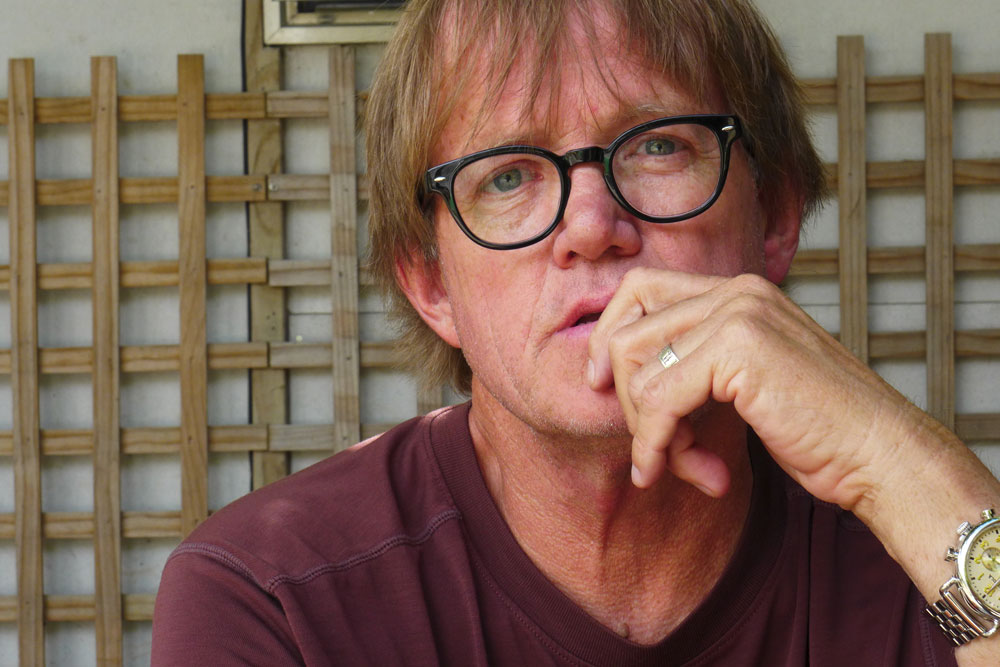 Phantom Billstickers – those fleet-footed rock’n’roll poster pasters and poetry lovers who’ve been in the business so long that Lorde’s mother was one of their feature poets back in the’90s – has morphed into a large and significant member of the NZ ad business.

Their work – flora for the concrete jungle, they call it with some justification, is now a colourful feature of said concrete jungle from Bluff to Kaitaia. Although still thoroughly ‘alternative’, Phantom has emerged from advertising’s darker corners and assumed legendary status.

Even more legendary is Phantom’s founder/owner, the passionate, enigmatic Jim Wilson, who travels the world – especially NZ and the USA – spreading the gospel on posters and poetry. He agreed to discuss his passions with M+AD …

What’s the latest news in your mission to take NZ & American poetry to the world?

We are also having a poetry reading in Christchurch in about a month to celebrate the opening of our new office there. These poem posters are always going up overseas as well and people help us in this endeavour.

What drew you to poetry in the first place?

I have always loved the written word.

At the time I started putting up poetry posters it perfectly expressed what I wanted to say to the world and it still does. At the start of the project (six years ago) I was coming off a medical course of interferon and I was clinically depressed and unable to express myself. I was also totally surrounded by lawyers and accountants. Poetry gave me new life. The lawyers and accountants are now gone and I am back.

Were you ever in a band yourself?

I have felt like a member of hundreds of bands in my time even though I never actually was. I managed and booked a lot of groups and I always felt like I was a member. I was always close to the music.

What I might say is that bands usually have a poster before they have a demo tape. An ‘image’ is arguably as important as the music and we have all bought albums for the cover art alone.

Do you have a ‘home’ life? What do you do outside spreading the word – and working?

It is important to have a home life. I never knew that in my earlier years but now I love the idea of ‘family’. I like French and German cars, photography, movies, writing and travel.

Me and Kelly have three dogs and I love them a little more each day. One is a British Bulldog called Raymond and he appears on the Phantom Billstickers logo. Raymond is quite the card.

Do you – or Phantom – use social media in any way?

Phantom has about 25,000 ‘followers’ on Facebook and I have a page. However; I much prefer print.

There has been so much hype about social media that the team at Phantom knew we had to get involved. However, our business in street posters has grown and I think many people find Facebook, and digital media in general, to be a little discouraging and people want ‘real’ things in life. Street posters are real.

Imagine the bureaucrats! It is a playground for politicians. Our days are filled with meetings with city council employees.

Does Phantom still do the first run of posters for local bands free? Including Lorde?

I think our current deal is that we put the first 20 posters up for new bands for free. Often our contracts with the various councils nationwide mean that we do some posters for free for community groups too.

We are always keen to invigorate the culture and that means we do a lot of work for artists that no one has ever heard of yet.

Lorde’s mother was one of our poets a long time before I had even heard of Lorde. Then we did a lot of work for Universal Music when Lorde first ‘broke’. There are lots of people out there who deserve the acclaim as well. New Zealand is chock full of talent and yet our country is built on dairy farming. Phantom seeks to balance this out a bit.

Roughly, what percentage of Phantom clients are ad agencies?

We work for approximately 400 different clients a month nationwide and probably 40% of our work comes from advertising agencies.

We also do a lot of work for city councils, festivals and events, art galleries, etc. and people who have brand new ideas. I like to think that anyone with a brand new idea calls us first to take their message to the streets.

The way it works now is that if you get us a file at 9am we can have your poster up in the streets of Invercargill or Palmerston North by lunchtime. Then we can have your fliers in all of the cafes by afternoon.

Any stand out (for good reasons or otherwise)

There are always lots of clever people out there having a go and wanting the take their message to the streets. We love helping them. It is very invigorating for us when a clever spark comes up with a way to put some colour in the streets.

The best poster I ever saw was for a Christchurch band called Lurch back in the ’90s. There have been various dance groups who have had great posters (I think Black Grace was one and Douglas Wright always has strong posters).

Do your guys ‘wear the face’ for ad agency people?

Right now we have a very enthusiastic sales team and we spend a lot of time encouraging them to reach out to people in ad agencies and elsewhere.

When I started the company (1982) it was all ‘under cover’. I had an awakening in the ’90s when I determined that we had to bring all this into the daylight. I was in Vienna and I saw a guy putting up posters in the street and whistling at the same time. Back where I came from we were still tipping buckets of glue on each other and evading the city council.

I started talking to these city councils and trying to impress on them that street posters were a necessity for a healthy culture.

What’s the silliest thing you ever did?

Too many to mention. I pasted a U2 poster on the front door of the Christchurch City Council at one stage. My only regret is that my efforts should have been for a band I actually liked. Then I had a guy who worked for me paste up the side of a bus in Cathedral Square. I was very proud of him and the bus driver chased us down Hereford Street.

I have done countless poster runs that I am very proud of. I have been privileged to put up in the streets some of the best artwork this country has produced. I call it flora for the concrete jungle. What kind of culture would we have were it to be entirely sterile and corporate?

I think we have the fastest growing outdoor advertising company in this country and certainly the most vital. We have close to 60 full time staff now and we tap them for ideas all the time.

Our new ‘Art Frames’ over this last year have been well received and our Phantom Billstickers Cafe Reader is very popular. Our weekly gig guide, The Fold, is now on its 100th issue. We also have backlit signs in Wilson’s Carparks nationwide.

In spite of my mixed feelings about digital media, this is an area that we are committed to and we will grow over these next five or 10 years. We also have about a dozen billboard sites now. So, we are always diving into the future and not resting on our laurels.

Who knows, we may even be invited to join the Outdoor Advertising Association one day! We probably employ more people than all of them put together.