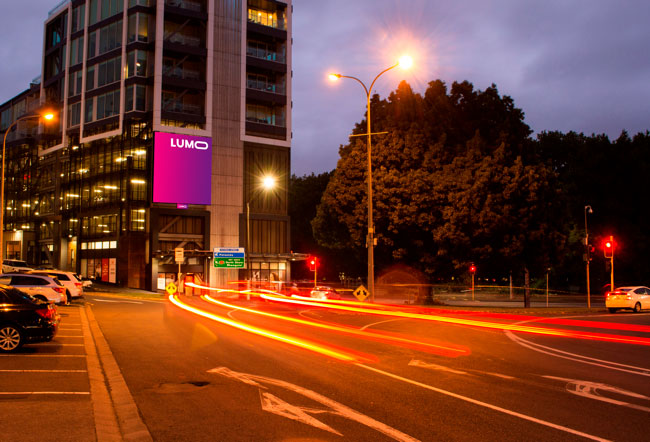 Phil Clemas and Harrison, of course, are well-regarded industry stalwarts – both previously ran APN Outdoor; Clemas was GM and Harrison his sales manager.

“LUMO Digital Outdoor is different to all other outdoor media companies,” Clemas says. “They believe in paving new ground, in exploring new possibilities and having the courage to do something first. Ideas should not be limited by a medium, but rather have endless possibilities and change the way people think.’

He says globally, outdoor advertising is the second-fastest growing channel, driven mainly by the enormous development of digital billboards and the market’s awakening to the huge range of new attributes digital brings to outdoor.

“The launch of our first smart LED billboard is an important milestone but we are mindful that one screen is just the beginning with much more to come in 2017,” he said. “We are determined to break the status quo and disrupt the existing model by introducing new technologies that offer more accountability, insight and agility.”

LUMO’s introduction of real-time traffic analytics is an industry-first and represents their commitment to technology-driven innovations and transparency, Clemas says.

Kent Harrison said: “We have partnered with some very clever US-based software engineers who have created and tested a programme that will count vehicles moving towards our Smart Billboards in real-time whilst also measuring their speeds.

Contextual relevance
“Real-time counts mean we will see the patterns of vehicular volumes by second, minute, hour and day resulting in greater accountability for our audience statistics and opportunity for more contextual relevance.

“Measurement of actual traffic volumes is a great start however the next phase of its on-going development will include vehicle-type identification – cars, vans, trucks, buses & motorbikes – which LUMO will introduce in early 2017.”

The Real-Time Traffic Analytics is available exclusively on all LUMO Smart Billboards and is one part of their technology toolkit. More on their unique package of tech innovations will be revealed in the coming weeks.