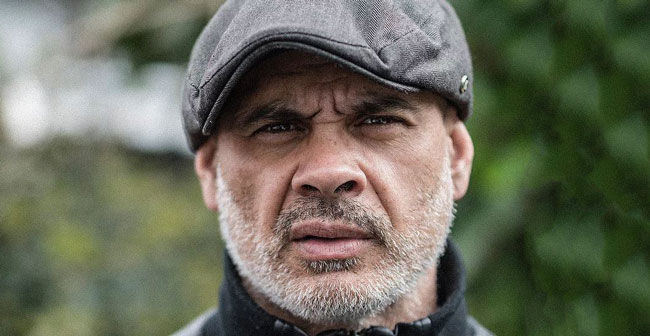 You can do anything with a poster – even turn it into a window frame to solicit donations of curtains for kids living in unfurnished homes. It’s the kind of thinking that’s led Darryl Roycroft to many creative breakthroughs. (This article was originally published earlier this week by Phantom Billstickers’ Phan Mail e=newsletter.

Currently doing the business for clients with his own agency Religion, Darryl has plied his trade as an Art Director and CD in Hamilton, Auckland and Honolulu. He’s helped T&C Surf re-invent their brand, worked up a sweat with Les Mills International, and created campaigns for Ministry of Education, BMW, Genesis Energy, Vodafone and a truckload more during stints with Ogilvy, Draft FCB and Roycroft Brown. Along the way he’s won a shelfload of awards.

Darryl has been a consistent advocate for great poster ideas and design. So we asked him what makes a creative execution jump off the wall.

What are some of the powerful posters that stand out in your memory?
“In New Zealand – Kit Kat where they had a kitset chair you could pull out of its Phantom Billstickers frame to ‘take a break.’ And I remember the campaign for Smirnoff’s Half Day Off in the early 2000s. What I loved was the consistent proposition across all media, plus great, simple poster design. Even if you weren’t a design snob, you’d get it.

“Internationally, there’s the Obama ‘Hope’ poster by Shepard Fairey. It looks like an old woodcut or screen print, which gives it that sense of authenticity. And it’s such a striking design – just three colours and one word. It’s up there with the classic Che Guevara image as a piece of design.”

Those are classics alright. What have you noticed on walls recently?
“The ‘Winter is Here’ street posters advertising Game of Thrones. They had special frames that made it look like the posters were encrusted with real icicles.

“I’m such a Game of Thrones fan, and I wanted to dive into the poster and enter that world, like kids opening the door to Narnia.”

What about posters you’ve had a hand in?
“I’m proud of the Genesis Energy campaign Chris Hunter, Graham Wiremu and I did at Draft FCB to attract curtain donations for the charity Curtain Bank. We had real window frames on walls with lifelike pictures of kids huddled in chilly bedrooms behind the panes. The headline was ‘Nobody deserves this kind of exposure.’ They got noticed, and they got a lot of curtain donations.

“Peter Brown and I also worked with Les Mills International to promote their Grit classes. You’re not supposed to put a lot of words on posters, and these ones were packed with gritty copy. But they worked because the idea was to inspire customers in gyms while they were resting between sessions. Sometimes you can break the rules.”

What makes a strong poster image?
“It’s simple, visual and engaging. That sounds so straightforward but it takes real talent to create something that’s visually striking yet rich with meaning.

“Photographer Chris Williams said something that sums it up: stories within stories within stories. You want to hint at a world beyond the image, with layers of meaning and more to discover. I’m inspired by people like Herbert Matter, who could show you a ski lodge without actually showing you the ski lodge.”

Any advice for young creatives who want to make great posters?
“Your ad should give the space where it appears, a reason for being, other than simply existing.

“Let me explain. A blank wall is just a structure to hold up a roof. But if you add a mural or poster, that wall has another purpose. So bring all your skills and talents to the job, because you want to be adding something that enriches the world. It’s like Phantom says – flora for the concrete jungle.

“The greatest cities in the world are alive with posters and street art. Think New York and Berlin. Somewhere like Singapore is very well run but it lacks that sense of vibrancy. I’m passionate about art in the street, and great posters can be part of that.”