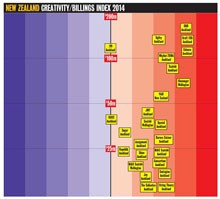 Campaign Brief has announced the entry call for its Agency of the Year competition, including Australian AoY and NZ AoY. Also up for a refresh is CB’s 2015 Creativity/Billings Index (or Hot+Cold Chart).

It’s free to enter, and you’re asked to provide all your best work on a USB stick, listing highlights of the year (including all awards won in 2014), new people, plus accounts won and lost, plus number of staff (or billings if you can) in a separate doco.

Include only work that has run between 1 January 1 and 31 December 2014. The deadline is Wednesday 17 December.

“Even if you feel it’s not your year, please send us your best as it is vital to work out where your agency fits on the 2015 CB Creativity/Billings Index,” says ed Michael Lynch.

Make sure your package arrives at CB prior to 12 noon Wednesday 17 December, 2014.

To advertise in this issue, contact mollie@campaignbrief.com. And think about reinforcing your campaign with an ad run simultaneously in M+AD (contact Kelly Lucas at ads@mad-daily.co.nz.