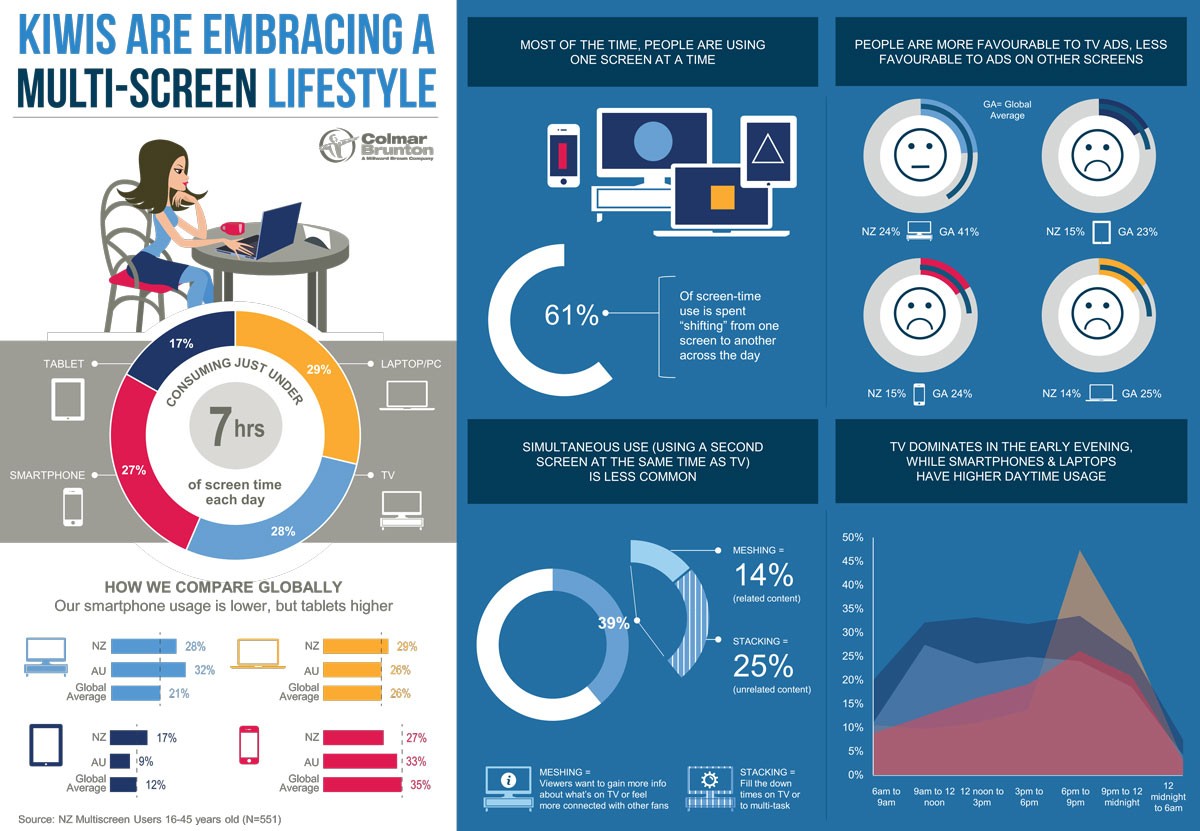 A Colmar Brunton AdReaction survey on marketing in a multiscreen world confirms Kiwis are embracing a multiscreen lifestyle, spending approximately seven hours a day in front of their lineup of screens. The survey digs into New Zealanders’ multiscreen habits and how they compare to their international counterparts.

Colmar Brunton CEO Jacqueline Ireland says one of the key findings is that compared to the global average and their Australian neighbours, Kiwis are tough nuts to crack when it comes to on screen advertising, which is why it is so important to understand how, when and why consumers are using their various screens.

“New Zealanders’ daily multiscreen use is a little below the global average but ahead of Australia,” Ireland says. “However Kiwis are a lot less receptive to on screen advertising compared to the global average.”

When it comes to receptivity to advertising messages, 24% of New Zealand’s multiscreen users are favourable towards TV advertising, well ahead of other screen advertising in New Zealand but a long way below the global average of 41% (but similar to our Australian neighbours).

Just 14% of Kiwi multiscreen users favour advertising on their laptops (global average 25%); Smartphone and tablet advertising enjoy only 15% favourability here compared to a global average of 24% for smartphones and 23% for tablets.

“This makes it critical for New Zealand businesses and marketers to get their multiscreen campaigns right and the first step is to understand Kiwis’ screen use,” Ireland says.

The survey revealed that smartphones and laptops have the most daytime screen use, with TV dominating from 6pm to 9pm. Tablets have a joint use both as work related (daytime) and particularly as a leisure time device.

But Ireland points out that despite the uptake of new technology, TV plays a pivotal role in the mix.

“We can break down these simultaneous screen viewing occasions into meshing – where TV and digital screens are being used to consume related content, and stacking – where the content and media tasks are unrelated to what’s on TV,” Ireland says.

“Combining overall receptivity with the amount of screen time shows that TV remains the largest New Zealand media opportunity. TV is the most common lead medium, with other screens more commonly used as continuations for related tasks,” Ireland says.

“It backs up our experience that viewers are keen to extend engagement with TV shows and advertising when extra online content is offered alongside traditional TV,” he says.

Draft FCB Planning Director Simon Bird agrees that the research indicates that TV delivers greater salience, higher advertisement attention and more favourable attitudes toward advertising than other screens – and all from a similar amount of eyeball time.

“It is a timely reminder that despite considerable and ongoing change in the AV world and a whole host of interesting new media options becoming available, TV in its current form is still an extremely influential channel for advertisers,” he says.

Jacqueline Ireland says the New Zealand and international survey results reveal exciting opportunities for multiscreen campaigns and the keys to getting multiscreen marketing right. “For brands meshing is the sweet spot and there are real opportunities here to bring screens together to provide a much more interactive experience. For example campaigns that include TV programme sponsorships linking to apps, voting, mobile play-alongs and online extras enhance the brand experience creating greater engagement and deeper connections.”

The results come from a survey of 551 New Zealand multiscreen users aged 16-45 years with a margin of error of + or –4%.