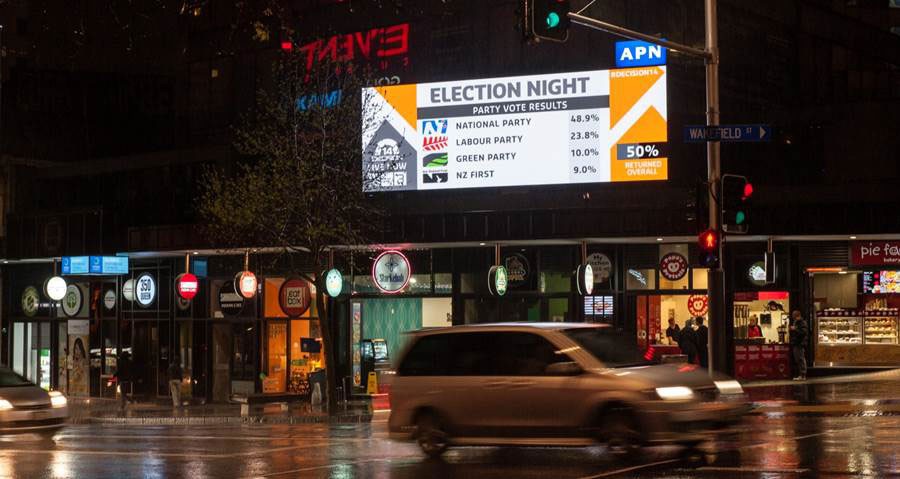 APN Outdoor teamed up with TV3 and their media agency Spark PHD for a NZ industry first – live elections results delivered across a digital billboard network during this year’s general election.

TV3’s live updates included results from parties including National, Labour, Greens and NZ First as they came to hand. Further results were shown from electorates close to APN Outdoor’s digital billboards – Auckland Central and Epsom. The percentage of overall results returned and counted was also featured.

The Aerva solution used was a self-login application, which allowed TV3 to access their content and update it within seconds.

“They enabled us to keep viewers updated with real time results – both from the 3News and Reid Research Polls, and as votes were counted on election night. We put the challenge out to help us deliver a dynamic world class campaign – and the digital billboard network certainly helped us deliver. The billboards are dynamic, modern and progressive – brand values shared with 3 News so it was a perfect fit.”

Phil Clemas, General Manager, APN Outdoor said: “MediaWorks TV has definitely taken the lead in terms of tapping into the digital capabilities we offer. This campaign was very strategic by design and took into consideration a number of elements – including location, timing, instantaneous messaging and creative flexibility ¬– which ultimately resulted in its success.

“It is great to see advertisers taking advantage of the many opportunities we offer with digital and we look forward to bringing many more cutting-edge campaigns like this to market in the future.”