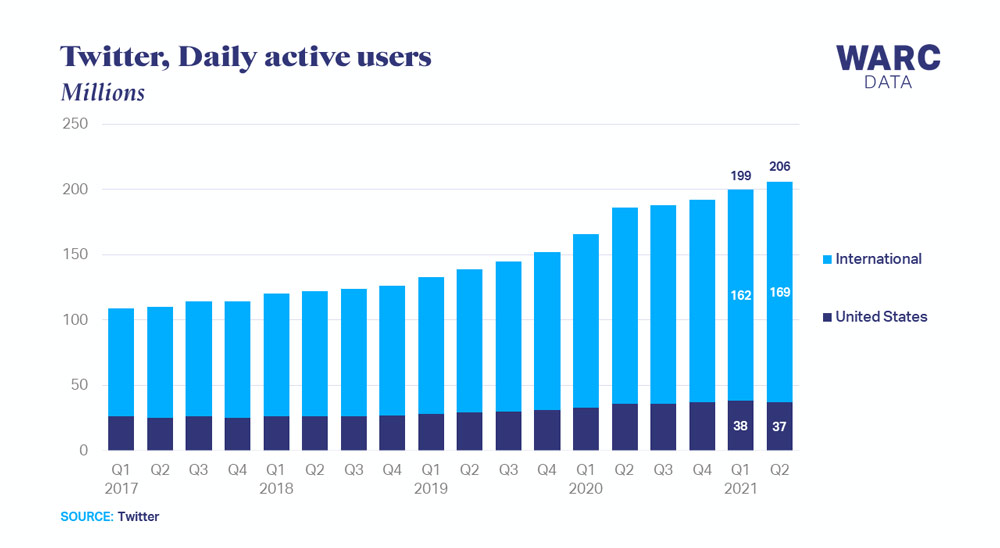 “Twitter’s ad revenue has topped $1bn for only the second time as the platform’s daily userbase reached a new high, according to the latest company reports.

The social media company earned $1,053m from advertising in the second quarter of 2021, an increase of 87.4% from the previous year following a collapse in revenue during the first wave of the coronavirus pandemic in Q2 2020.

The company also said that total ad engagements increased 32% and cost per engagement also rose 42% year on year. Although Apple’s launch of iOS 14.5 in April posed a potential challenge to Twitter’s advertising revenue, the company said the impact was “more muted than we expected”.

Content image
Daily active users also saw strong growth in Q2 2021, rising by 7 million to top 200 million for the first time. International markets account for the majority of this, up 7 million to a total of 169 million.

Twitter’s audience in the United States has been more stable, however. The company lost one million daily users in Q2 2021 to a total of 37 million, a figure that is just one million higher than the previous year. Additional research shows 38% of Twitter users are aged between 18-24, a comparable figure to Pinterest and Instagram.

The company aims to reach 315 million daily active users by the end of 2023, which currently requires an average of 10.9 million daily users being added each quarter. For both Q1 and Q2 2021, the company added 7 million per quarter. However, Twitter hopes future product innovations and online communities will help drive audience activity.